With the publication of a collection of his speeches , the late, unlamented (from the Left at any rate) Supreme Court Justice Antonin Scalia is back in the news. Scalia was well-known for describing himself as an "Originalist" when it came to Constitutional law. He held that the Constitution should be interpreted as controlling in the sense that the framers would have understood it at the time of the framing. No other interpretation is to be allowed. Another name for that approach is called "strict constructionism." As the Federal bench is being filled with far right-wing judges (and a Supreme Court justice or two), picked for the Trumpites by the far-right Federalist Society, we are going to be hearing a lot more of that phraseology.

OK. If 'originalism" is going to be the guiding light of decision-making in the Federal courts, more-and-more down the road, it does pay to take a look at what the doctrine means, and more importantly how it has been and will be used by the Right-wing/Trumpite Federal bench. For that understanding let us turn to no less authority than Scalia himself:

"Let me begin by telling you what originalism is. The Constitution, as you know, contains a number of broad provisions, which are necessarily vague in their application: due process of law, equal protection of the laws, cruel and unusual punishments, the freedom of speech, to name a few. Originalism gives to those terms the meaning they were understood to have when the people adopted them. Is the death penalty cruel and unusual punishment? A hard question, perhaps, for the non-originalist. I have sat with four colleagues who thought it was. But for the originalist the answer is easy: At the time the people ratified the Eighth Amendment -- the Cruel and Unusual Punishments Clause -- no one thought it forbade the death penalty." 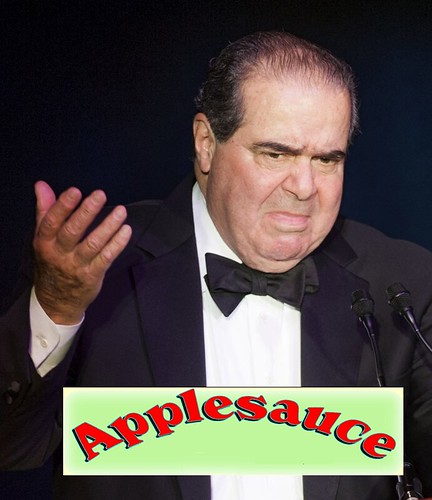 The key sentence here is: "Originalism gives to those terms the meaning they were understood to have when the people adopted them." Sounds logical, right? Well, perhaps. But perhaps not so fast. Unlike the Napoleonic Codes that govern the law in much of Europe the phrases the Scalia quotes are not in fact absolute in their language. "Equal protection of the law," "Freedom of speech," and certainly "due process of law" are all concepts wide open to interpretation, starting with the question "for whom?" They are actually quite ambiguous terms.

In fact the Constitution, starting right from the Preamble (ignored by all, but a quite powerful statement of the purposes the government defined by the Constitution is supposed to fulfill), is filled with ambiguity, ranging from what exactly is "interstate commerce" (Art. I, Sect 8) to what exactly is a "Republican form of government" (Art. IV, Sect. 4). And when it came to the powers of the Supreme Court (Art. III, Sects. 1 and 2), it is again inexact. So much so that the fourth Chief Justice of the United States, John Marshall, going into territory that none of his predecessors had done, in a series of decisions starting with Marbury v. Madison, was able to fashion the broad-ranging review powers of the Court over the actions of both the Federal and state governments that are nowhere mentioned in the Constitution, explicitly or even vaguely (see Chap. 5, "Anderson v. Board of Education," The 15% Solution: How the Republican Religious Right Took Control of the U.S. 1981-2022: A Futuristic Novel http://www.puntopress.com/2013/03/23/jonas-the-15-solution-hits-main-distribution/).

And so, Scalia is right in stating that "Originalism" should be one's guide in the interpretation of the Constitution. He is just wrong in stating what the Framers had in mind when they wrote it. To repeat, they filled it with ambiguity, hardly an endorsement of any kind, from the plain text of the document itself, of the concepts of "originalism" (in the sense that Scalia promoted the term) or "strict constructionism." Scalia just used that high-sounding concept as a cover for basing his opinions on his personal philosophy and understanding of the law, and politics, which is in fact what all justices of the Supreme Court have always done.

And then we come to Judge Roy Moore's concept of "Originalism." It indeed is original alright; that is, original with the Religious Right . For Moore sees "God" in the Constitution and Moore holds that it is "God's Law" that is controlling, above the Constitution. Furthermore, the "God" that Moore sees in the Constitution is a particular one. It is not the Jewish God (and of course there are several of those), nor the Islamic one, nor that of the variety of other monotheistic religions which have followers on the Earth, such as Zoroastrianism , nor those of the variety of polytheistic religions such as Hinduism (widely practiced). Moore's of course is the "Christian" God. Now even within the limits of Christianity there are a number of different interpretations of what "God" is and means. Presumably what Moore means by the word is the Southern Baptist concept in which he was raised and apparently has never left.

But this is a minor problem for the Moore Doctrine compared to the fact that neither the words "God" nor "Christian" (or "Christianity") appear anywhere in the Constitution or are even alluded to. The word "Religion" does appear of course, but in the exclusionary sense as in the "no religious test" provision of Article VI and the Establishment Clause of the First Amendment. But these facts present no obstacle to Moore because a) in a highly original approach to the Constitution, Moore claims that the Declaration of Independence is "organically" part of it (I heard him say this in a radio interview with Michelangelo Signorelli of Sirius XM Radio Progress). But golly gee, I have read the Constitution numerous times and have never been able to find the Declaration included in it or even alluded to. And b) he interprets the phrase "Nature's God" in the Declaration to mean specifically the Christian God as Moore understands him (and for Moore is most surely is a "him," not a "her") and the term "Creator" as again meaning Moore's Christian God.

Now there are a couple of textual problems that arise for Moore, even in just the interpretation of the Declaration (and of course if the Framers, several of whom contributed to the writing of the Declaration, had wanted to include it or any of its language in the Constitution they surely would have). First, in the Declaration the term "Nature's God" refers specifically to "the separate and equal station to which the Laws of Nature and of Nature's God entitle them," the "them" being "one people [wishing] to dissolve the political bands which have connected them with another and to assume among the powers of the earth. . ." Very limited, to a breakaway of one ruling group from that of the Mother Country (secession, if you will).

Second, in perhaps the Declaration's most famous sentence, "We hold these truths to be self-evident, that all men are created equal, that they are endowed by their Creator with certain unalienable Rights, that among these are Life, Liberty and the pursuit of Happiness[,]" the framers, one must assume with the consciousness of what they were doing, chose to use the word "Creator," not the word "God." And I, as a Reasonist, am perfectly comfortable with that word, which for me means the laws of physics, chemistry, and biology.

Moore stands as an accused pedophile, a conclusion to which many Republicans as reactionary politically as he is have come. But even if that were not the case, if he does get to the Senate, he would be a very dangerous figure there. Moore is indeed a racist (birtherism), a violent homophobe (homosexual acts should be against the law [as they are in, say, Saudi Arabia and Uganda]), and an Islamophobe (in opposing the seating of Cong. Keith Ellison because he is a Muslim, the self-proclaimed "Constitutionalist" apparently never got to the "no religious test for office" part of it). Moore holds that "God" (which of course means what he means as "God," for example a power that would unleash the bombers of 9/11 to punish what he regards as "Godlessness" in the United States) stands above the Constitution. Which makes him, like Mike Pence and Ted Cruz, a Dominionist. Which also makes it OK for him, as the Chief Justice of the Alabama Supreme Court, to tell court officers throughout Alabama that they don't have to obey a US Supreme Court ruling.

And so, for both Rightists, Moore and Scalia, "originalism" really means that the "Constitution says what I say it says," which, if one goes back through the ruling of countless reactionary judges on the court over the years who have tried to cloak themselves in that false doctrine, is hardly an original position.

Steven Jonas, MD, MPH, MS is a Professor Emeritus of Preventive Medicine at StonyBrookMedicine (NY) and author/co-author/editor/co-editor of over 35 books. In addition to his position on OpEdNews as a â€œTrusted Author,â€ he is a Senior (more...)
Related Topic(s): Christianity; Constitution The; Constitutional Issues; Constitutionalism; Creator; Declaration; Homophobe; Judge Roy Moore; Justice Antonin Scalia; Reactionary; (more...) Republican; Rights, Add Tags  (less...)
Add to My Group(s)
Go To Commenting
The views expressed herein are the sole responsibility of the author and do not necessarily reflect those of this website or its editors.