Don't hold your breath. While the media is breathlessly describing yesterday's order by President Donald Trump's "to provide for the immediate (emphasis added) declassification" of Russia-gate materials as a "showdown," any likely showdown is months away, if it comes at all.

The word "immediate" can mean different things to different people. Had the President set a deadline, or had he given the declassification task to his own National Security Council, the word "showdown" might be closer to what to expect.

The tragic-comedy now on stage in Washington is beyond bizarre. Can President Trump be unaware that those he "ordered" to do the declassification -- top officials of the Justice Department, the FBI, and the intelligence agencies -- have zero incentive to comply "immediately." And they have minus-zero incentive, as the top echelons see it, to throw their former bosses, colleagues, and co-conspirators under the bus by releasing the family jewels.

Most of today's commentary by anonymous officials on declassification are transparently bogus. To suggest, for example, that "death could occur," as one MSNBC pundit predicted this afternoon, is beyond ludicrous. Do not expect Establishment media, however, to stop its feeding frenzy at the Deep State trough.

The stakes could hardly be higher not only for the Deep State, but also for the media -- including erstwhile "progressive" pundits not yet recovered, after 22 months, from the virulent virus I call "HWHW" (Hillary Would Have Won). Observations by Mark Twain and, more recently, Patrick Lawrence apply in spades to the widely shared predicament of Russia-gate. Twain: "It is easier to fool people than to convince them that they have been fooled."

Lawrence put it this way in Consortium News: "The most ordinary standards of evidentiary procedure are forgone. Many of our key institutions--the foreign policy apparatus, the media, key intelligence and law-enforcement agencies, the political leadership--are now extravagantly committed to a narrative none appears able to control. The risk of self-inflicted damage these institutions assume, should the truth of the Russia-gate events emerge--as one day it surely will--is nearly incalculable. " Russia-gate, in a phrase, has become too big to fail." 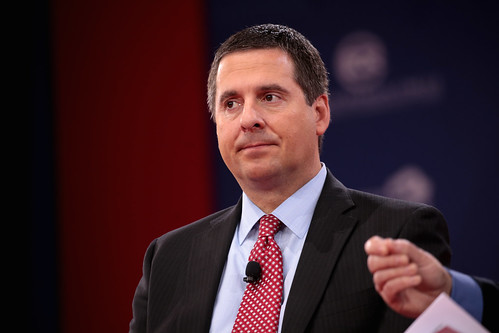 Nunes: 'We will put them on trial.'
(Image by Gage Skidmore)   Details   DMCA

Trump has now put the ball in the miscreants' court but, with the media on their side, Deep State functionaries enjoy the equivalent of home-court advantage. House Intelligence Committee Chair Devin Nunes (R, CA) has pretty much warned of this. Speaking of classified passages Trump has now ordered released, Nunes in late July expressed hedged confidence "that once the American people see these 20 pages, at least for those that will get real reporting on this issue, (emphasis added) they will be shocked by what's in that FISA [Foreign Intelligence Surveillance Act] application" to surveil Carter Page, an American citizen, and member of Trump's campaign team.

Sure, Nunes is a Trump supporter. But he also has this strange -- these days one might say romantic -- notion that the way the U.S. Constitution set things up, he and his committee have the power -- and the duty -- to oversee the agencies that Congress established and funds, and to uncover any abuses. The behavior of the chairs of the House Judiciary and Oversight Committees shows they share that view.

On February 18, Nunes threw down a heavy gauntlet during an interview with journalist Sheryl Attkisson:

"FISA abuse " as it relates to the Department of Justice and the FBI, if they need to be put on trial, we will put them on trial. The reason that Congress exists is to oversee these agencies that we created. DOJ and FBI are not above the law. Congress created them, we oversee them, and we fund them. And if they're committing abuse for a secret court, getting warrants on American citizens, you're darn right that we're going to put them on trial."

Nunes put that on the record back in February. What can possibly explain Trump's reluctance to order declassification of relevant FISA and other documents (with such redactions that might be truly necessary) until seven months later, and just seven weeks before the mid-term elections? And why did Trump throw down a cautious, paper-thin gauntlet, with no firm deadline -- inviting Deep State stonewalling?

Ray McGovern works with Tell the Word, the publishing arm of the ecumenical Church of the Saviour in inner-city Washington. He was an Army infantry/intelligence officer and then a CIA analyst for 27 years, and is now on the Steering Group of Veteran Intelligence Professionals for Sanity (VIPS). His (more...)
Related Topic(s): Central Intelligence Agency; FISA; Federal Agency FBI, Add Tags
Add to My Group(s)
Go To Commenting
The views expressed herein are the sole responsibility of the author and do not necessarily reflect those of this website or its editors.