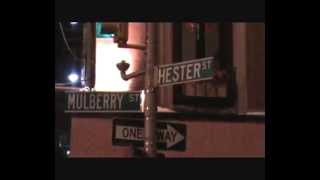 Umberto's Clam House was located on the corne of Hester and Mulberry Street in Little Italy. It's there that Joey Gallo met his demise..
(Image by YouTube, Channel: merville78)   Details   DMCA

It had all the subtlety of a mob hit.

The Don: "So what's the story with this Soleimani? Why's he still around acting like a big shot, messing around in our territory? He should show some respect."

Old Soldier: "Well, Don, when you tore up that treaty with his boss, this guy started acting like that territory was all fair game for him. I mean, he was always a pain in the ass, causing trouble everywhere."

Don: "How come nobody set him straight?"

Old Soldier: "It ain't that simple. His boss let's him take care of business how he sees fit and his guys are really loyal. They've also been through lots of family wars and, to tell you the truth, I think they like hitting the mattresses and blowing people up. The Don before you felt it was more important to make the family stronger, expand its influence and not lose any more young soldiers. He kept an eye on Soleimani and warned his boss not to get too greedy. But this guy's ambitious and a little reckless, y'know? Difficult. Kinda like Joey Gallo was."

Don: "I hear this guy likes to hang out at Amani's Falafel House in Baghdad."

Old Soldier: "Yeah. Kinda on the QT, though."

Don: "Maybe we should surprise him."

Don: "I hear you got a new house painter."

Don: "Ask him if he likes falafel pita. Tell him it's my favorite. It ain't, but he don't have to know."

Related Topic(s): Iran; Mob Violence; Movies; Roy Cohn; Soleimani; Trump; Trump Mobster; Wars, Add Tags
Add to My Group(s)
Go To Commenting
The views expressed herein are the sole responsibility of the author and do not necessarily reflect those of this website or its editors.