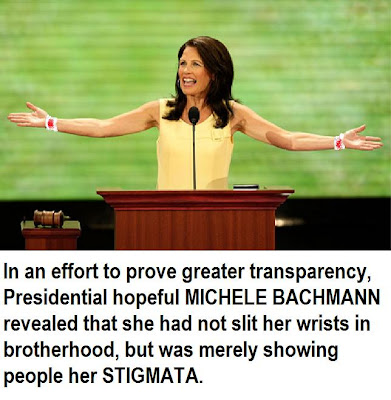 I had no idea that the people of Minneapolis had such a monumental hatred for the rest of the country. I mean, didn't we portray it in a good enough light on the Mary Tyler Moore Show? Sure, we saw lots of snow, overcoats and a woolly caps, but come on, there's no reason for Minneapolis to curse the rest of the country with one of history's most insidiously stupid politicians!

Yeah, yeah we know that Sarah Palin started us down the slippery slope of accepting power-grabbing dimwits, the country was starting to opine for the good 'ole days of W and stand-up comedians are starving for material, but has our hunger to be entertained overshadowed our need to be led by someone with at least half a brain?

From the instant his fruitful eight-year reign ended, Republicans have pined for the next Ronald Reagan... Sarah Palin, you say?Â The buzz inside the Beltway is that Mrs. Bachmann may be looking to add a woman's touch to the Oval Office (beyond just sprucing up its temporary occupant's eyesore decor). Her spokesman, Doug Sachtleben, has confirmed to media that the congresswoman is considering a potential presidential run, saying: "Nothing's off the table."

Nothing's off the table, except, maybe, sanity. Or a modicum of intelligence. Barber goes on to describe Bachmann as a "maverick's maverick," the most conservative member of Congress (because only a right wingnut job will do) and "indifferent to what the moonbat media and the larger loony left think about her." Not counting the rather original "moonbat media" jibe, Barber waxes predictable: Bachmann is the perfect uber-Christian for the office of POTUS. So, if elected by all of the other uber-Rightwing Christians, we will be treated to more of these wonderful bits of wisdom:

Bachmann's "reasoning" runs the gamut from tortured to absolutely clueless.

Are people pining away for George Bush to the extent that they'll take someone with equal (or lesser) value? The Right constantly screams at the Left on how vicious it was towards Bush when the truth is that many of us were laughing too hard to be vicious. Focusing on ineptitude as monumental as Bush's took a vigilance so constant that it wore many of us out, leading the introspective amongst us to surmise that maybe Bush was acting "The Good Soldier Schweik." The fact that half of the country voted for him TWICE was an indication that the dumbing of America had finally taken hold and that we were on the slippery slope to irrelevancy.

Barber's fawning also stated "her existing widespread Tea Party support" which may or may not be true, because the TP's lack of credible foundation and leadership makes them look as if they'll hold on to anything that says "no more big government, no more taxes."Â

Excess of any kind can be comical, so that is why Barber's statement that if coupled with Obama in a debate, Bachmann would "mop the floor with him," now lies as the most laughable statement out the mouth of a rabid Religious Right (oops, - social conservative) Reconstructionist.

Excessive idiocy aside, the Right wing theocrats (religious or political) of today need to rein Bachmann in and let her make her mark in history through insanely stupid malapropisms. Allowing her a wider audience would be a nail in the coffin of America's intelligence.

Rev. Dan Vojir is has been writing/blogging on religion and politics for the better part of ten years. A former radio talk show host (Strictly Books €" Talk America Radio Network) and book publisher, Dan has connected with some of the most (more...)
Related Topic(s): Christofascists; Liberty Counsel; Matt Barber; Michele Bachmann; Reconstructionist; Religious Right; Right Wing Mindset Culture; Righteous Assassination; STUPIDITY, Add Tags
Add to My Group(s)
Go To Commenting
The views expressed herein are the sole responsibility of the author and do not necessarily reflect those of this website or its editors.