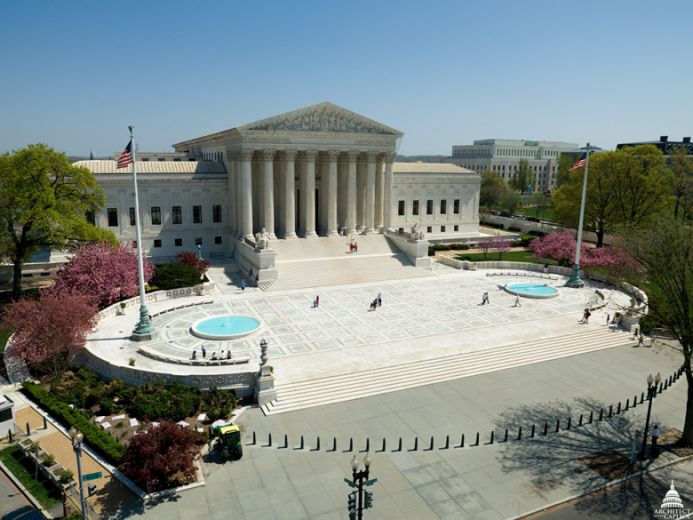 It is important when thinking about the United States Supreme Court to remember its long and storied history of getting it wrong. Separate but equal, child labor constitutional and a man is still his master's property even in a territory where said ownership was illegal. Bush V. Gore, theft in plain sight. So, to expect some sort of honor of law instead we see the authoritarian hand in black robes. Waving a sickle announcing the border war is a coming!

The court ruled that foreign nationals cannot sue American agents who commit crimes on American soil. In every version of the story Sergio Adrian Hernandez Guereca was shot in the face in 2010. At worst Sergio Adrian Hernandez was throwing rocks and feigning attempts at border crossing. Obnoxious behavior is now grounds for lethal force? Sergio Adrian Hernandez Guereca was fifteen years old. The Supreme Court ruled, Yeah that's all right. Keep doing that, keep shooting kids if they throw rocks at you. What message does it send to Mexicans along the border? I've never heard of an altercation where just one side brings guns.

I've never heard of a side given court approval to fire when ready Gridley to have a calming effect. Maybe it was only one rock this time. Or maybe he looked like he was going to throw a stone, will that be enough tomorrow? It all but setting up a free fire zone encouraging violence ginning up the base. How's that for red meat? It's in lock step with the Cheeto's planned campaign. Vote for me and I'll shoot em down for you. So, if you're trying to get money for border wall construction would you really want peace and quiet?

The court ruled that if a border agent shoots you in United States while you're standing in Mexico that you would have no recourse, too bad, tough luck.

Needless to say, the Mexican government is concerned about having their citizens shot and killed across an international border and who has jurisdiction? The gun was fired in the United States the bullet entered the man's body in Mexico. It would seem the crime was committed in Mexico and should have been adjudicated there. But that's not what's going to happen here these aren't the droids you're looking for. There's a noticeable change that authoritarian chill in the air. What they will do to them today they will do to you tomorrow. There is no first class in the cattle car. Just as in Nazi Germany the court must amend the law to condone the act.

Related Topic(s): Justice Delayed; Justice Democrats; Justice Denied; Justice John Paul Stevens; Justice Neil Gorsuch; Justice Party; Justice Stephen Breyer, Add Tags
Add to My Group(s)
Go To Commenting
The views expressed herein are the sole responsibility of the author and do not necessarily reflect those of this website or its editors.