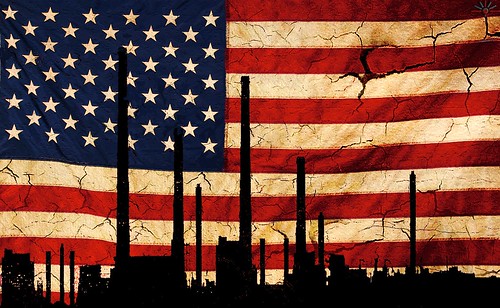 USA Industry by AK Rockefeller Attribution-ShareAlike License
(Image by AK Rockefeller)   Details   DMCA
Many Americans think of July 4th as some sort of very special flag day, but for those Americans bitterly ashamed of USA's continuous criminal world wide violence and bloodletting, the sight of the flag is almost unbearably uncomfortable.Americans who flinch at the sight of their nation's flag, never forgot the rage in the voice of former President Obama's pastor, Rev. Jeremiah Wright, during TV news bites of him shouting, his finger pointing to heaven, "God bless America? No, no! God damn America for her crimes against humanity," and never forgot the snide smiles and head shaking of the criminal media news commentators following the sound bite.The pop, bang and swish of 4th of July fireworks will be reminding the few peace loving Americans of the sound of mortars and the words of American film maker Michael Moore,"sick and twisted violent people that we've been for hundreds of years, it's something that's just in our craw, just in our DNA. Americans kill people, because that's what we do. We invade countries. We send drones in to kill civilians." USA's genocides began even before July 4th 1776 - the New England banks African Slave trade, then the land banks pushing for US genocidal war on Native Americans, Mexicans and Filipinos, before invading China and loan sharking the First World War. The greatest crime was rearming a prostate Nazi Germany for war on the USSR. Appalled Americans remember hearing US Representative Ron Paul stating during each of the 2012 presidential candidates debates, "Every bombing and invasion starting with Korea was illegal, unconstitutional and a horrific loss of life," and are still amazed his words could have been so completely ignored. Independence Holiday in the USA becomes a time when many citizens tend to reflect on the nations two hundred and forty-three year history. It is a history typical of six European overseas empires in the areas of genocide and plunder.The USA, like its parent colonial power the British Empire, before it, has had its undeservedly wealthy elite through their private speculative investment banks continually investing in genocide in order to both maintain its power over society and accumulate capital extend its power wherever and whenever regardless of laws, including regardless of common law.US banks have invested in profitable genocide non-stop over the entire life of the nation up to today and have their CIA and Pentagon laying plans for more genocide as we read.Did Independence Day bring some uneasy feelings about America eventually being brought to justice for so much firing on the poor overseas and denying other nations independence from subservience to America's plundering Wall Street speculative investment bankers.Majority humanity must not wait for Americans to free themselves from the deception, egoism, ignorance and violence that is seeded and psyoped into the minds of Americans as children to justify killing of tens of millions of poor in order to, as Martin Luther King said, "maintain unjust predatory investments overseas."The 3rd World will one day seek justice in the form of compensation for the millions murdered in their own countries, often in their very own homes, reparations for the mega massive destruction and indemnity for colossal theft of natural resources and that will bankrupt Wall Street's insane and end war profitability.

This Fourth of July holiday will still be that of but that of an embarrassing self-proclaimed superior nation, but someday the world will celebrate the birth of kind of the America Ray Charles sang of in his soulful rendition of 'America The Beautiful.

Related Topic(s): Bombing; Death; The Fourth Of July, Add Tags
Add to My Group(s)
Go To Commenting
The views expressed herein are the sole responsibility of the author and do not necessarily reflect those of this website or its editors.