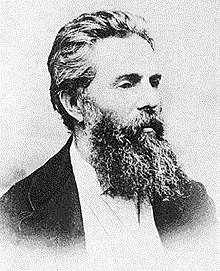 But nineteenth-century America also included strange times, most notably the Civil War (1861-1865) and its aftermath - including the unvanquished persistence of white supremacy at the expense of Black Americans. The nineteenth-century white American author Herman Melville (1819-1891) lived through the strange times of the Civil War and its immediate aftermath. For the upcoming occasion of the American centennial on July 4, 1876, he labored mightily on his 18,000-line poem on American culture. But to contemplate American culture in its broader world context, he used the Holy Land for its setting, creating a group of pilgrims, including several Americans, on a pilgrimage in the Holy Land.

From colonial times onward to the Declaration of Independence on July 4, 1776, the American Revolution, and writing and ratification of the U.S. Constitution, the predominantly Protestant American culture had been religion-obsessed and Bible-obsessed - the Bible in English translation being the King James Bible of 1611. Consequently, to the white American Protestant author Melville it seemed suitable to use the Holy Land as the setting for his extended centennial meditation on Americans, including himself, and American culture.

Now, my favorite scholar is the American Jesuit Renaissance specialist and cultural historian Walter J. Ong (1912-2003; Ph.D. in English, Harvard University, 1955). Over the years, I took five courses from him at Saint Louis University, the Jesuit university in St. Louis, Missouri. I also took a course from Ong's fellow Missouri Province Jesuit Joseph G. Knapp (1924-1987; Ph.D. in English, University of Minnesota, 1962). However, only recently did I learn that Knapp had published his revised doctoral dissertation as the 1971 book Tortured Synthesis: The Meaning of Melville's Clarel. As the title of Knapp's book indicates, Melville's long centennial poem Clarel: A Poem and Pilgrimage in the Holy Land (1876) is the focal point of his book.

Disclosure: Later in my life, I was in the Jesuit order (1979-1987). However, for many years now, I have not been a practicing Catholic. Today, I would describe myself as a theistic humanist, as distinct from an atheistic humanist (also known as a secularist). At 76, I have now out lived Melville by roughly four years. I can readily imagine myself at roughly comparable ages to Melville as I write about his life journey - well enough that I can relate my own experiences to his.

As part of their lengthy Jesuit training both Ong and Knapp studied Aquinas' thought (in Latin) in their studies of philosophy and theology. For a sampler of Aquinas' thought, see the 2020 edition of the Reverend Dr. Matthew Fox's superb book Sheer Joy: [Four] Conversations with Thomas Aquinas on Creation Spirituality, in which Fox creatively supplies translations from 52 works by Aquinas in Latin - and the 2020 edition includes a useful index (pages 533-542).

Unfortunately for American Catholics such as Ong and Knapp, American Protestantism tended to be anti-Catholic not only up to Melville's lifetime, but also up to the present time, as the former American Catholic religion scholar Philip Jenkins shows in his 2003 book The New Anti-Catholicism: The Last Acceptable Prejudice and as the American Jesuit historian Mark S. Massa shows in his 2003 book Anti-Catholicism in America: The Last Acceptable Prejudice.

For an account of Ong's life and work, see my book Walter Ong's Contributions to Cultural Studies: The Phenomenology of the Word and I-Thou Communication, 2nd revised and expanded ed. (2015; 1st ed., 2000), in which Chapter 6 is titled "Ong the Cultural Relativist" (pages 121-143). In it, I discuss Ong's 1967 book The Presence of the Word: Some Prolegomena for Cultural and Religious History, the expanded version of his 1964 Terry Lectures at Yale University.

Now, around the age of 22, young Herman Melville (1819-1891) lived among cannibals in the South Seas in what Ong came to refer to as a primary oral culture. Subsequently, young Melville embellished his South Seas adventures in Typee (1846) and Omoo (1847), and the still young Melville dived deep into his psyche and his own personal experiences from around the age of 22 on a whaler in writing his massive and circumstantially detailed novel Moby-Dick (1851).

Now, in 1960, Walter E. Bezanson (1912-2011) of Rutgers University, whose unpublished 1943 Yale University doctoral dissertation was on Melville's Clarel, published his landmark critical edition of Melville's four-part centennial poem Clarel: A Poem and Pilgrimage in the Holy Land. Bezanson's lengthy 1960 "Introduction" (pages ix-xciii) and his 1960 "The Characters: A Critical Index" (pages 529-549) are included, slightly updated, in the 1991 900-page edition of Clarel, published by Northwestern University Press and the Newberry Library as volume twelve of The Writings of Herman Melville, edited by Harrison Hayford, Hershel Parker, and G. Thomas Tanselle (pages 505-613 and 613-635, respectively). The Library of America 2019 edition of Melville's Complete Poems, edited by Hershel Parker and Robert A. Sandberg, includes the 1991 text of Clarel (pages 153-646). Parker supplied the "Chronology" (pages 909-926) and the helpful "Notes" to Clarel (pages 949-975).

Now, the American Jungian psychiatrist and psychotherapist Edward F. Edinger, M.D. (1922-1998) has explored Melville's deep dive into his psyche in his 1978 book Melville's Moby-Dick : A Jungian Commentary: An American Nekyia. However, subsequently, Melville again dived deep into his psyche and his own personal experience as an American Protestant in writing his massive centennial poem Clarel: A Poem and Pilgrimage in the Holy Land (1876), which features the semi-autobiographical but idealized character Rolfe as well as Melville as the narrator. Melville turned 57 in 1876, the year in which Clarel was published. It was the last major literary work he completed. Melville lived to 1891; he died at the age of 72.

For Bezanson's relevant discussions of Rolfe in the 1991 edition of Clarel, see the subsections "Characters" (pages 571-579), "Aspects of [Melville's] Self" (pages 587-604), and "A Critical Index of the [32] Characters" (pages 613-635 at 630-631). Despite the length of Bezanson's material and the other related material in the 1991 edition of Clarel, the edition does not include an index, which would have been helpful for new readers to have available to consult. Of the 32 characters, not counting the narrator (a version of Melville), Bezanson, who almost certainly came from an American Protestant background, as of course did Melville himself, considers ten characters to be major characters: