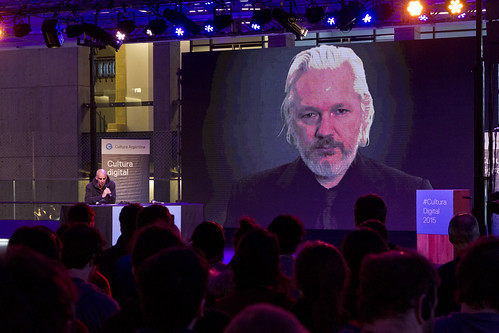 Is he a Bond villain? A spoiled brat? A righteous scumbag? A"singularly unattractive defendant"? Perhaps even an enemy of the people for practicing journalism?

By most accounts, Assange is certainly no hero. He's been variously reviled, imprisoned, self-exiled and denounced. It's said he has poor personal hygiene and even spread feces across an embassy wall. Much worse, he's twice been accused of sexual assault-including by a woman still seeking to have the case reopened. And of course he distributed stolen emails and documents as part of a successful attempt by the Russians to help elect Donald Trump, who famously crowed during his presidential campaign about how much he "loved" WikiLeaks.

But the ever-fickle Trump soon fell out of love with the WikiLeaks founder. In 2017, his CIA director Mike Pompeo (now Secretary of State) labeled WikiLeaks a "non-state hostile intelligence service." Later that year Assange was secretly indicted, accused of conspiracy to commit computer intrusion. The charges were only made public in 2019, shortly before Trump's Justice Department, in an 18-count superseding indictment, accused Assange of violating the Espionage Act, alleging that he unlawfully worked with former Army intelligence analyst Chelsea Manning to obtain and disseminate classified information-including the massacre of civilians in Afghanistan. The biggest revelation came from a 2007 video of American soldiers killing a dozen civilians-including two Reuters photographers-and then laughing about it. Reuters editors had been shown it by the Pentagon and then told to file a Freedom of Information Act request to acquire a copy. The Pentagon then blocked the request-but Manning obtained the video and Assange released it, along with evidence of other atrocities, including the French military strafing a bus full of schoolchildren in Afghanistan.

This reporting is precisely the type of conduct reporters at outlets such as the New York Times and Washington Post engage in regularly, perhaps most notably in the Pentagon Papers case. Such activity is also what the First Amendment is designed to protect: the ability of publishers to provide the public with the truth. Prosecutors are now trying to draw a line between Assange and others who are practicing journalism-but their effort rests on a big lie. Namely that, as John Demers, assistant attorney general for national security, succinctly put it, "Julian Assange is no journalist."

Despite his many foibles, transgressions and alleged crimes, and his arguably misguided activism, Assange undoubtedly has engaged in a string of extraordinary acts of journalism. As the New York Times Editorial Board noted, he also "shared much of the material at issue with the New York Times and other news organizations. The resulting stories demonstrated why the protections afforded the press have served the American public so well; they shed important light on the American war effort in Iraq, revealing how the United States turned a blind eye to the torture of prisoners by Iraqi forces and how extensively Iran had meddled in the conflict."

One fact, then, should be clear: say what you will, like it or not, Julian Assange is in part a journalist. Since he is now under indictment for practicing journalism that has rightly been hailed as "by any standard one of the greatest journalistic scoops of the last 30 years"-and because the charges against him are also a thinly disguised assault on American journalism, aimed straight at the heart of the First Amendment-Assange has been chosen as the fourth recipient of "The Danny," more formally known as the Danny Schechter Global Vision Award for Journalism & Activism, awarded annually to an individual who best emulates Schechter's practice of combining excellent journalism with social advocacy and activism. The award includes a $3,000 stipend, which in this instance will be donated to Assange's legal defense.

The Assange case represents a threat not only to freedom of expression but also to the heart of American democracy itself. Much of what he does, after all, involves selecting, editing, verifying and even contextualizing news material-again, just as many journalists do. Digital technology has now given billions of people the power to commit acts of journalism. That may not make them "journalists" in the way we used to think of the term-but it certainly means their journalism deserves the same sort of protection as that of those who have had more traditional media careers.

Trump's inquisitors are clearly trying to contrast the unlikeable anti-secrecy advocate with professional reporters and publishers. But as Sam Thielman noted in the Columbia Journalism Review, "Press-freedom cases are a mangy bunch"you will see that all of them were prosecuted or otherwise punished for some bizarre and tasteless variation on an activity journalists have to perform every day. And for better or worse, we have to be on their team."

The charges against Assange make the ultimate targets of his prosecution clear: journalists worldwide. Prosecutors are using the case against him to mask a blatantly political campaign to limit all journalists-a cornerstone of the Trump agenda often expressed by the president himself. The charges describe the routine practices of investigative and national-security journalists-and would effectively criminalize a wide range of reporting practices. So the stakes for both Assange and the rest of the news media have dramatically increased, raising questions about the limits of the First Amendment and protections for publishers of classified information.

Filmmaker and journalist Rory O'Connor writes the 'Media Is A Plural' blog, accessible at www.roryoconnor.org.
Related Topic(s): Julian Assange, Add Tags
Add to My Group(s)
Go To Commenting
The views expressed herein are the sole responsibility of the author and do not necessarily reflect those of this website or its editors.

Obama Comes for the Journalists

Crossing Zero: How and Why the Media Misses the AfPak Story