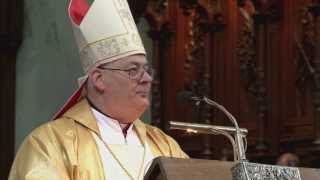 During World War II Cardinal Jozsef Mindszenty was a huge critic of fascism and wound up in prison. In Oct. 1945 he became head of the Church in Hungary and spoke out just as strongly against Communist oppression. He wound up back in prison for eight more years, including long periods of solitary confinement and endured other forms of torture. In 1949 he was sentenced to life in a show trial that generated worldwide condemnation.

Two weeks after the trial began in early 1949, Pope Pius XII (having failed to speak out forcefully against the Third Reich) did summon the courage to condemn what was happening to Mindszenty. Pius excommunicated everyone involved in the Mindszenty trial. Then, addressing a huge crowd on St. Peter's Square, he asked, "Do you want a Church that remains silent when she should speak ... a Church that does not condemn the suppression of conscience and does not stand up for the just liberty of the people ... a Church that locks herself up within the four walls of her temple in unseemly sycophancy...?"

When the Hungarian revolution broke out in 1956, Mindszenty was freed, but only for four days. When Soviet tanks rolled back into Budapest, he fled to the U.S. embassy and was given immediate asylum by President Eisenhower.

There the Cardinal stayed cooped up for the next 15 years. Mindszenty's mother was permitted to visit him four times a year, and the communist authorities stationed secret police outside the embassy ready to arrest him should he try to leave. Sound familiar?

Where is the voice of conscience to condemn what is happening to Julian Assange, whose only "crime" is publishing documents exposing the criminal activities and corruption of governments and other Establishment elites? Decades ago, the U.S. and "civilized world" had nothing but high praise for the courageous Mindszenty. He became a candidate for sainthood.

And Assange? He has been confined in the Ecuadorian embassy in London for six years -- from June 19, 2012 -- the victim of a scurrilous slander campaign and British threats to arrest him, should he ever step outside. The U.S. government has been putting extraordinary pressure on Ecuador to end his asylum and top U.S. officials have made it clear that, as soon as they get their hands on him, they will manufacture a reason to put him on trial and put him in prison. All for spreading unwelcome truth around.

A Suppression of Conscience

One might ask, is "unseemly sycophancy" at work among the media? The silence of what used to be the noble profession of journalism is deafening. John Pilger -- one of the few journalists to speak out on Julian Assange's behalf, labels journalists who fail to stand in solidarity with Assange in exposing the behavior of the Establishment, "Vichy journalists -- after the Vichy government that served and enabled the German occupation of France."

"No investigative journalism in my lifetime can equal the importance of what WikiLeaks has done in calling rapacious power to account. It is as if a one-way moral screen has been pushed back to expose the imperialism of liberal democracies: the commitment to endless warfare ... When Harold Pinter accepted the Nobel Prize for Literature in 2005, he referred to 'a vast tapestry of lies upon which we feed.' He asked why 'the systematic brutality, the widespread atrocities, the ruthless suppression of independent thought' of the Soviet Union were well known in the West while America's imperial crimes "never happened ... even while [they] were happening, they never happened.'"

In an op-ed published several years ago by The Los Angeles Times, two members of Veteran Intelligence Professionals for Sanity, Coleen Rowley and Bogdan Dzakovic, pointed out that -- If WikiLeaks had been up and running before 9/11 -- frustrated FBI investigators might have chosen to leak information that their superiors bottled up, perhaps averting the terrorism attacks.

"There were a lot of us in the run-up to Sept. 11 who had seen warning signs that something devastating might be in the planning stages. But we worked for ossified bureaucracies incapable of acting quickly and decisively. Lately, the two of us have been wondering how things might have been different if there had been a quick, confidential way to get information out."

Ray McGovern works with Tell the Word, the publishing arm of the ecumenical Church of the Saviour in inner-city Washington. He was an Army infantry/intelligence officer and then a CIA analyst for 27 years, and is now on the Steering Group of Veteran Intelligence Professionals for Sanity (VIPS). His (more...)
Related Topic(s): Cardinal Jozsef Mindszenty; Fascism; Julian Assange; Reporters; Wikileaks, Add Tags
Add to My Group(s)
Go To Commenting
The views expressed herein are the sole responsibility of the author and do not necessarily reflect those of this website or its editors.