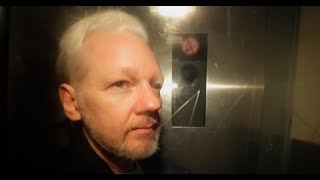 Federal authorities in the Eastern District of Virginia (EDVA) last week issued a superceding indictment and charged Wikileaks co-founder Julian Assange with 17 counts of espionage. Along with a charge of conspiring to gain access to a government computer, he faces 175 years in prison. Julian's current plight is well-known. He's serving a 50-week sentence for bail-jumping in London's maximum-security Belmarsh Prison, awaiting extradition to the United States. Swedish authorities have reopened a sexual assault investigation against him. And in the meantime, his attorneys are challenging any extradition to the United States, all the way to the European Court of Human Rights, if necessary.

I want to get a couple of points out of the way before I get into the substance of this column. I believe unreservedly that Julian Assange is a journalist, a publisher, a whistleblower, and a prisoner of conscience. His revelations of US war crimes were examples of exactly what a journalist and publisher should be doing. His actions meet the legal definition of whistleblowing: Bringing to light any evidence of waste, fraud, abuse, illegality, or threats to the public health or public safety. And he is clearly a prisoner of conscience, incarcerated for his belief in transparency and that all governments should be held accountable for their actions.

Somebody should mention this to Amnesty International (AI). The global "human rights" organization has turned its back on Julian, just as it did to Chelsea Manning, CIA whistleblower Jeffrey Sterling, and me.

Here's how AI defines a prisoner of conscience: A Prisoner of Conscience is "someone who has not used or advocated violence but is imprisoned because of who they are (sexual orientation, ethnic, national or social origin, language, birth, color, sex or economic status) or what they believe (religious, political or other conscientiously held beliefs)."

Following my arrest in 2012 for blowing the whistle on the CIA's torture program, I contacted AI to ask for a simple statement of support. Surely, I thought, an organization so clearly committed to human rights would want to say something about the person just arrested for exposing an official torture program. But they didn't even bother to respond to me. I then asked a contact of mine, a senior person in Amnesty International USA, to weigh in for me with his bosses in London. "Sorry," was the response. "They just don't believe that you're a whistleblower or a prisoner of conscience."

(Ironically, Chinese dissident Ai Weiwei, arguably the most famous and important living artist in the world, believes that Julian Assange, Chelsea Manning, and I are all whistleblowers and "prisoners of conscience." He created portraits of us out of Legos for a show at Alcatraz on prisoners of conscience and then sold the entire installation to the Smithsonian Institution's Hirshhorn Museum.)

I used to be a regular donor to Amnesty International. No more. I guess I never realized how much in the pocket of the State Department the organization is. First, it simply doesn't recognize the fact that an American can be a prisoner of conscience. Sure, every once in a while, AI will issue a statement about somebody who has been arrested for opposing nuclear weapons or something like that. But it pains them to have to criticize the US. We're the "land of the free," after all. Right?

AI does not publish a list of prisoners of conscience. But a Google search indicates that almost all of the prisoners AI has campaigned for in the past several years come from Russia, China, Iraq, Iran, and the former Soviet Republics. There are no prisoners of conscience from the US, UK, or even France, where journalists are being threatened with arrest for their criticism of the French military's involvement in the war in Yemen. Go figure.

And lest you think that this is just John Kiriakou venting (which I tend to do), AI was involved in something of an ideological scandal in 2010 that cuts to the heart of what kind of organization it is.

In 2010, AI suspended and then fired Gita Sahgal, the head of its gender unit, after she complained that the organization had embraced Moazzem Begg, a Briton of Pakistani origin, who headed a group called Cageprisoners, purporting to represent men held in prisons extra-judicially. Sahgal maintained that Begg was a terrorist sympathizer and Muslim extremist and that AI was weakening its brand by associating itself with him, while legitimizing him politically.

That's being kind. I captured Moazzem Begg in Pakistan in February 2002. I targeted him because he was Osama bin Laden's computer expert. I put him on a plane for Guantanamo but, because he was a British citizen, he was quickly released. And what did he do? He went right back to Afghanistan and rejoined the fight. The CIA caught him again, and again went through the same rigmarole. Begg was exceptionally intelligent. He was able to recast himself as an innocent man who was in the wrong place at the wrong time, was kidnapped by the CIA, abused at Guantanamo and finally released because he was innocent of any crime. That's nonsense.

AI, though, never bothered to investigate who, exactly, it was associating with. And when a senior-level employee blew the whistle, AI attacked the whistleblower in favor of the terrorist.

Related Topic(s): Amnesty; Extradition; International; Julian Assange Imprisonment; Prisoner Abuse; Whistleblower; Wikileaks, Add Tags
Add to My Group(s)
Go To Commenting
The views expressed herein are the sole responsibility of the author and do not necessarily reflect those of this website or its editors.