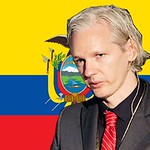 In what will be certainly a short-lived exclusive if true, independent Journalist and Monetary Reformer Bill Still reports that Julian Assange has most likely escaped from the U.K. where he was given sanctuary in the Ecuadorean Embassy in London since 2012.

Citing Intelligence sources, which Still has due to long-standing high level government clearance, Still reports that not only has Assange been granted Ecuadorean citizenship and Diplomatic status, but that he has likely crossed the English Channel and is now in neutral Switzerland. The U.K. is expected to rule shortly to drop all charges against him.

Still cites Trump as the force behind freeing Assange, in his recent meeting with U.K.'s Prime Minister Theresa May.

Related Topic(s): Assange; Citizenship; Julian Assange; Julian Assange Martyr; Sanctuary, Add Tags
Add to My Group(s)
Go To Commenting
The views expressed herein are the sole responsibility of the author and do not necessarily reflect those of this website or its editors.