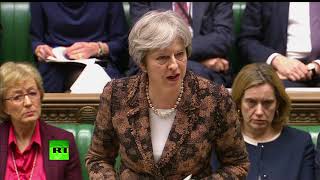 May speech on Skripal poisoning: 'Highly likely' Russia responsible Prime Minister Theresa May is giving an update to MPs on the poisoning of Russian ex-double agent Sergei Skripal and his daughter. May told the Commons military-grade nerve agent from Rus
(Image by YouTube, Channel: RT)   Details   DMCA

The last couple of weeks it's been hard to avoid the story coming out of Britain about a suspected nerve agent attack on former Soviet double agent Sergei Skripal and his daughter now living in Salisbury, England.

British Prime Minister Teresa May has called it "highly likely that Russia was responsible" and "a direct act by the Russian state against our country."

As usual no evidence has been presented, just accusations and allegations with France, Germany and of course the Trump administration all in agreement with May's denunciation of Russia.

Russia of course rejects the accusations as no clear evidence of its complicity has been presented.

After seeing a video of the British House of Commons during Labor Leader Jeremy Corbin's speech where he was heckled by other MP's after he asked for evidence of Russia's complicity in the alleged attack it became clear judgment against Russia had already been reached, no evidence required.

It seemed reminiscent of the early cold war 1950's. McCarthyism in the Congress was rampant where the senator from Wisconsin falsely branded hundreds in the State Department of being Communists-no evidence given, while in the then House Un-American Activities Committee people suspected of being Communists were brought before the Committee to ask them if they were members of the Communist Party. If they refused to answer or became circumspect during this "inquisition" many were blacklisted as suspected Communists got fired from their jobs and in particular some Hollywood actors who didn't satisfy the Committee weren't given roles in future movies. Charlie Chaplin was deported to England.

Today in the west and particularly the US corporate MSM the demonization of Russia and President Vladimir Putin is virulent and unrelenting coinciding with the narrative of all major the governments in the west. Anyone outside the government or their complicit enablers in the corporate MSM who questions the demonizing of Russia is labeled as a Russian stooge, a Kremlin apologist, a Putin puppet.

In fact employment of journalism skeptics or real investigative reporters by the MSM in the current MSM environment are rare, maybe even non-existent. In fact are there any of these journalists still working in the corporate media?

Seymour Hersh once wrote articles for the New York Times where he exposed the Mai Lai massacre. He also wrote for "The New Yorker" magazine. Now he's found occasionally in The London Review of Books, not exactly a widely read MSM outlet.

Chris Hedges was once the Middle East bureau chief for the New York Times that is till he questioned "Dubya" Bush's invasion and occupation of Iraq in a May, 2003 commencement speech at Rockford College in Illinois. The Times gave him a formal reprimand after which he resigned from the paper. Other than a few interviews on "Democracy Now" aired on some PBS stations he's nowhere to be found on the airwaves except on RT online, the outlet now forced by the Justice Department to register as a foreign agent under FARA, Foreign Agents Registration Act, a 1938 law against NAZI Germany.

We all know the story of Gary Webb who was blacklisted from getting another job as a reporter soon after he was let go by the San Jose Mercury after he broke the story of the CIA's role in drug smuggling. Major news outlets like the New York Times heavily criticized Webb's reporting and the Mercury being a small market operation couldn't withstand the crushing influence of the Times so it caved in and let Webb go. A few years later not able to get another reporters job he committed suicide.

Robert Parry was an investigative reporter for the Associated Press and Newsweek who exposed the Iran-Contra affair in the 1980's, the Reagan administration's secret operation swapping weapons to Iran for money to support the Contras against the legitimately elected government in Nicaragua. In the 1990's Parry founded the online Consortium News and was its senior editor until his death in January- not exactly a MSM outlet.

Now what we DO get that purports to being the "truth" are video's of the "White Helmets" those supposedly humanitarian aid workers shown helping the Syrian people who have been seriously injured by the Syrian Arab Army in gas attacks and shelling against civilians. Hollywood last year gave them an Oscar.

Retired. The author of "DECEIT AND EXCESS IN AMERICA, HOW THE MONEYED INTERESTS HAVE STOLEN AMERICA AND HOW WE CAN GET IT BACK", Authorhouse, 2009
Related Topic(s): Demonizing; Judgment; McCarthyism, Add Tags
Add to My Group(s)
Go To Commenting
The views expressed herein are the sole responsibility of the author and do not necessarily reflect those of this website or its editors.