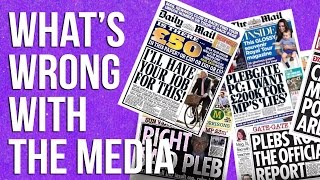 What's wrong with the media?
(Image by YouTube, Channel: The School of Life)   Details   DMCA

In a recent interview with USA Watchdog I described Western journalists as prostitutes who whore for a living.

One of them who did so -- Udo Ulfkotte -- describes what it is like. For the naive and insouciant Western people who need to hear the truth from the horse's mouth, here is a translation of one of Udo Ulfkotte's lectures on the subject.

Kopp in Germany published Ulfkotte's book, Gekaufte Journalisten (Bought Journalism) several years ago. It was a best seller. An English language edition was authorized, but its publication was blocked by intelligence services. You can get an idea of the book from the lecture. See below...

Here is the transcript:

In 2014, the German journalist and writer Udo Ulfkotte published a book that created a big stir, describing how the journalistic profession is thoroughly corrupt and infiltrated by intelligence services.

Although eagerly anticipated by many, the English translation of the book, Bought Journalists, does not seem to be forthcoming anytime soon.

[We covered that story at the time Ed.]

So I have made English subtitles and transcribed this still very relevant 2015-lecture for those that are curious about Ulfkotte's work. It covers many of the subjects described in the book.

Udo Ulfkotte died of a heart attack in January 2017, in all likelihood part of the severe medical complications he got from his exposure to German-made chemical weapons supplied to Saddam Hussein during the Iran-Iraq War in the 1980s.

[Only the first 49 minutes are translated; the second half of the lecture deals mostly with more local issues]

Introducer Oliver: I am very proud to have such a brave man amongst us: Udo Ulfkotte

Udo Ulfkotte: Thanks...Thanks for the invitation...Thanks to Oliver. I heard to my great surprise from Oliver that he didn't know someone from the intelligence services (VVS) would be present. I wish him a warm welcome. I don't mean that as a joke, I heard this in advance, and got to know that Oliver didn't know. If he wants if it is a man he can wave. If not?" no?"[laughter from the audience]

Related Topic(s): Journalism; Journalist Abuse; Media, Add Tags
Add to My Group(s)
Go To Commenting
The views expressed herein are the sole responsibility of the author and do not necessarily reflect those of this website or its editors.