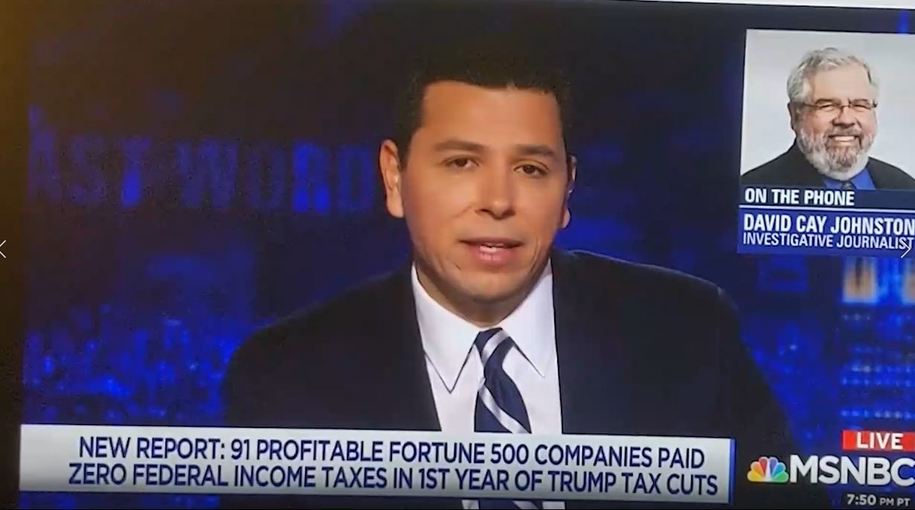 The report is out on Donald Trump's tax cut and it is not pretty. Just as we expected it helped corporations and not the people. David Cay Johnston said the tax cut scam was nothing but a future tax increase with interest. He was unequivocal in the clip below as he slammed the tax cut.

The Institute on Taxation and Economic Policy issued the report Corporate Tax Avoidance in the First Year of the Trump Tax Law.

This study provides a comprehensive overview of profitable corporations' effective tax rates in 2018, the first year that companies were subject to the Tax Cuts and Jobs Act (TCJA), the tax law signed by President Donald Trump at the end of 2017. The law lowered the statutory federal corporate income tax rate to 21 percent (a 40 percent decrease from the previous 35 percent rate) and made other changes affecting what companies pay.

For most of these companies, their effective federal income tax rate was much lower than the statutory corporate tax rate of 21 percent. This is by design.

When drafting the tax law, lawmakers could have eliminated special breaks and loopholes in the corporate tax to offset the cost of reducing the statutory rate. Instead, the new law introduced many new breaks and loopholes, though it eliminated some old ones. The unsurprising result: Profitable American corporations in 2018 collectively paid an average effective federal income tax rate of 11.3 percent on their 2018 income, barely more than half the 21 percent statutory tax rate.

Narrative is everything. It is essential that we are clear that Trump's tax cut, for the wealthy and the corporations, is nothing but a tax increase with interest for the rest of us.

Egberto Willies is a political activist, author, political blogger, radio show host, business owner, software developer, web designer, and mechanical engineer in Kingwood, TX. Egberto is an ardent Liberal that believes tolerance is essential. His favorite phrase is "political involvement should be a requirement for citizenship". He believes that we must get away from the current policies that reward those who simply move money/capital and produce nothing tangible for our society. If a change in policy does not occur, America will be no different than many oligarchic societies where a few are able to accumulate wealth while (more...)
Related Topic(s): David Cay Johnson; Trump Tax Cut, Add Tags
Add to My Group(s)
Go To Commenting
The views expressed herein are the sole responsibility of the author and do not necessarily reflect those of this website or its editors.