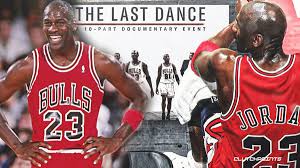 Like every other basketball fan, I've just finished watching ESPN's ten-episode series, "The Last Dance." It was about the 1997-'98 championship year of Michael Jordan and the Chicago Bulls' - their sixth such triumph in eight years.

The series took on special meaning for me, since at the same time, I was reading the late Allan G. Johnson's book, The Gender Knot: unraveling our patriarchal legacy. Johnson's analysis made me realize that I was witnessing in the Jordan video saga, the stark exposure of the same system Johnson was explaining in his book. Feminist scholar, bell hooks, calls it the "white supremacist, capitalist, imperialist patriarchy." That's the oppressive paradigm in which all of us - men and women alike - live and move and have our being. Hooks and Johnson agree on that point.

But Johnson goes further. He suggests guidelines for escaping the paradigm to make room for its replacement. Following Episode 10 of "The Last Dance," I found myself wishing Michael Jordan and the Chicago Bulls had followed their direction. If they had, we might today be living in a very different world.

Before I get to that, consider first The Gender Knot, and then "The Last Dance." Together they reveal our patriarchal dilemma.

The main thought of The Gender Knot is that every one of us is influenced by a powerful force called patriarchy. It represents our culture's fundamental paradigm - its unspoken social arrangement and set of assumptions - this one driven by men's fears and their need to control. It promotes male privilege by being male dominated, male identified, and male centered. It's what undergirds capitalism, racism, classism, and, of course, sexism.

For Johnson, patriarchy sets the rules of the game. It's like we're playing "Monopoly" barely aware that its instructions force us to adopt attitudes and activities that would be disturbing in other situations. "Sorry to drive you into bankruptcy," we might find ourselves saying, "but those are the rules of the game."

Understood in this sense, patriarchy governs the jokes men tell, our banter with other men. It governs male self-images as we compare ourselves with peers, competitors, co- workers, friends, characters in movies and on the field of play. It also governs workplace interactions between labor and management.

For many, that thesis in itself might be familiar. What was not as familiar (to me at least) is Johnson's more penetrating insight that patriarchy is not primarily about men's fearful and controlling relationships with women.

Instead, patriarchy is chiefly about relations among men. Psychologically, it's about men justifying and protecting our "manly" and strong self-image before other men whose scrutiny hovers over every aspect of life - on the athletic field, at the bar, in the stadium, in the bedroom, and on the job. In all of these venues, we judge ourselves through a patriarchal gaze. At the deepest level, then, it's other men we fear - how they might threaten, ridicule, replace, or even rape us.

Economically, it's about how they might fire us from our jobs after our work has made them rich.

Those watching "The Last Dance" with such analysis in mind can see it played out in the series.

It brings us into the hyper-male context of locker room, court, fawning reporters, and fans. (Virtually no women have significant roles in any of the episodes.) It's an entirely man's world and so provides a kind of petri dish for observing and testing Johnson's theory about men's fears and desire to control. It also provides a context for analyzing the bigger patriarchal issue of white supremacist capitalism.

Related Topic(s): Basketball; Capitalism; Consciousness; Organize; Patriarchy; Power; Workers, Add Tags
Add to My Group(s)
Go To Commenting
The views expressed herein are the sole responsibility of the author and do not necessarily reflect those of this website or its editors.