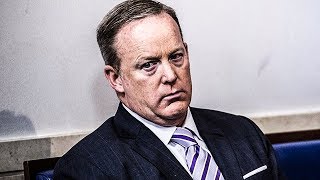 The hangover from the Emmy Awards is finally wearing off and things are getting more serious now for the former White House spokesman. The Daily Beast reports Sean Spicer has lawyered up:

"According to his bio page at the firm London & Mead, Mead specializes in white collar criminal defense and Congressional investigations, as well as issues related to the Foreign Corrupt Practices Act -- a law that bars Americans from bribing foreign government officials. His law firm bio also boasts that he gained 'extensive experience in money laundering' prosecutions when he was a prosecutor for the U.S. Attorney for the District of Maryland."

In fact, three of Mead's specialty areas might be/are of particular interest:

Public Corruption/Election Law Violations
Chris has represented congressional staffers in public corruption and election law investigations. He was part of the defense team for a major D.C. developer charged with public corruption violations. After a successful trial defense, the client received probation.

The move comes after Mike Allen at Axios drew attention to Sean Spicer's habit of meticulously taking notes in every meeting:

"Now we can tell you about another potential honey pot for Mueller. Former colleagues of Sean Spicer tell Axios that he filled 'notebook after notebook' during meetings at the Republican National Committee, later at the Trump campaign, and then at the White House.

"When Spicer worked at the RNC, he was said to have filled black books emblazoned with the party's seal. Spicer was so well-known for his copious notes that underlings joked about him writing a tell-all."

Related Topic(s): Attorneys Lawyers; Investigations; Republican; Sean Spicer, Add Tags
Add to My Group(s)
Go To Commenting
The views expressed herein are the sole responsibility of the author and do not necessarily reflect those of this website or its editors.