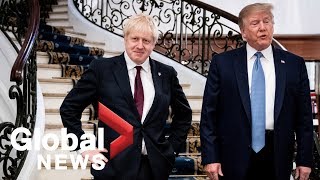 Prime Minister Boris Johnson's decision to prorogue Parliament is an historic attack on democratic rights and an attempt to force through a Brexit agenda that will have devastating consequences for the jobs and living standards of the working class.

Faced with plans by a majority of MPs to prevent at least a no-deal Brexit -- leaving the European Union (EU) without a trade and customs arrangement -- Johnson has determined to curtail the sitting of Parliament on Sept. 9 for a five-week period so that any deal he might strike with Brussels or a no-deal will become a fait accompli on October 31.

Johnson's moves to rip up British constitutional norms is part of a global assault on democratic rights. All over the world, the ruling elites, faced with an intractable social, political and economic crisis, are turning to increasingly autocratic and dictatorial forms or rule. Johnson's proroguing of the "Mother of Parliaments" is of a piece with Trump's government by emergency rule and the build-up of police state powers and military rearmament by Germany, France and the rest of Europe.

Throughout Europe, the response of governments to the deepening crisis of world capitalism is more austerity, the whipping up of nationalism and anti-immigrant xenophobia, the resort to authoritarian forms of rule and cultivation of the fascist right.

Johnson acts on behalf of that section of the British ruling class that sees leaving the EU as a means of completing the "Thatcher revolution." His goal is to consolidate the UK as a deregulated tax haven with no restrictions on the exploitation of the working class and with what little remains of the welfare state dismantled or privatized. The bedrock of his perspective is a political and military alliance with the Trump administration in the US designed to project Britain's imperialist ambitions on the world arena.

Johnson's proroguing of Parliament exposes the anti-democratic and nationalist agenda of the factions of the British ruling class that pressed for Brexit. Many workers who voted for Brexit did so to register hostility to the ruling elite in Westminster, who have presided over the transformation of vast swathes of Britain's major conurbations into industrial deserts. But this sentiment was exploited by the Brexiteer Tories and Nigel Farage, then head of the UK Independence Party and now the Brexit Party, who claimed that "liberation" from Brussels and anti-immigrant measures would provide funds for the National Health Service and "British jobs for British workers." This was the biggest lie of all. Brexit will mean more austerity, the turn to state repression and the poisoning of society with xenophobia and nationalism.

Johnson's proroguing Parliament shows that there is no line he will not cross in suppressing the political and social opposition produced by the savage austerity on which the post-Brexit "global competitiveness" of the UK depends. "Operation Yellowhammer" warns of "a rise in public disorder," "community tensions" and strikes. To meet this threat 10,000 riot police will be mobilized, reinforced by 30,000 regular troops and 20,000 reserves.

Recognition of the grave threat to democratic rights and living standards has galvanized political opposition to Johnson among millions of workers and young people. But the decisive political task facing those entering into struggle against Johnson is an orientation to the international working class, in a struggle independent from all factions of the ruling elite.

The Remain faction of the British bourgeoisie, while it drapes its policies in invocations of the sanctity of Parliament, is no less hostile to the working class and to democratic rights than Johnson himself. It is made up of Tory Remainers that, until 2016, were the closest allies of the Brexiteers, Liberal Democrats who were their coalition partners until 2015 and Blairite stooges of big business. They differ only in championing the EU because the dominant view of business and finance is that membership and access to the single market is the best way for Britain to pursue trade war measures, while offering to be Washington's main ally on the continent. Should they win the day against Johnson, the offensive against the working class would continue unabated -- as was proved in Greece, Portugal and Spain where austerity was imposed by EU diktat.

No one should have any illusions that the "remain" wing of the British ruling class would protect workers' democratic rights. Throughout Europe, the pro-EU wings of the European ruling class have carried out sweeping attacks on democracy, from the German grand coalition's promotion of neo-fascists at the highest levels of the state, to Emmanuel Macron's crackdown on peaceful protests in France and his praise of the Nazi collaborationist dictator Philippe Pe'tain.

The most insidious political role is played by Labour leader Jeremy Corbyn. He was elected on the basis of pledges to defeat austerity and militarism, end the Blairites' domination of the Labour Party, and fight the Tories. For four years, he has met every attack by the Blairites and the right-wing media with efforts to convince his critics that a government he led could be trusted to safeguard the interests of capital. Now, he is offering to lead a "caretaker government" to unite all the pro-Remain opposition parties in alliance with pro-EU Tories and delay Brexit on October 31. He would act as a front man for a de facto unelected government of national unity in alliance with right-wing forces. This would serve to deepen divisions in the working class over Brexit and strengthen the far-right forces grouped around Johnson.

The bankers of the City of London understand Corbyn's role very well, which is why the Financial Times editorialized, "Those opposed to a no-deal Brexit must then cast aside their differences and pass a motion of no confidence in the government. This is unpalatable for even the most ardent Tory Remainers, and others such as the Liberal Democrats, since ousting Mr Johnson in time to affect the Brexit process may also require the creation of a caretaker government under Labour's Jeremy Corbyn -- an outcome they rightly fear. The overriding priority, however, must be to safeguard British democracy."

The goal of the Remain faction of the ruling class is to safeguard not democracy, but the interests of the City of London. The last time Britain's ruling elite resorted to a government of national unity was in 1931, when Labour leader Ramsay MacDonald joined the Tories to supposedly combat the impact of the Wall Street Crash. The working class paid the price in mass unemployment, the emergence of Oswald Mosley's British Union of Fascists in an echo of the fascist regimes in Germany and Italy and the plunging of humanity, just eight years later, into the horrors of world war.

Writing in 1929, Leon Trotsky surveyed a European continent in which democracy was already giving way to dictatorship in country after country:

Chris Marsden's work can be found on wsws.org, a website dedicated to global awareness of socialist issues & which serves as the forum for the International Committee of the Fourth International (ICFI).
Related Topic(s): Boris Johnson; Brexit; British Court; British Politics; Rights Denied; Workers, Add Tags
Add to My Group(s)
Go To Commenting
The views expressed herein are the sole responsibility of the author and do not necessarily reflect those of this website or its editors.