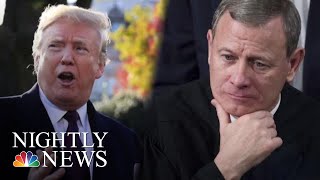 In November 2018, after President Donald Trump blasted a federal jurist as an "Obama judge" for overturning his new restrictions on political asylum, Supreme Court Chief Justice Roberts issued a biting reply in a statement to the Associated Press: "We do not have Obama judges or Trump judges, Bush judges or Clinton judges. What we have is an extraordinary group of dedicated judges doing their level best to do equal right to those appearing before them. The independent judiciary is something we should all be thankful for."

Never one to shy away from verbal combat, Trump tweeted out a snarky rejoinder: "Sorry Chief Justice John Roberts, but you do indeed have 'Obama judges,' and they have a much different point of view than the people who are charged with the safety of our country."

I'm sorry, too, Mr. Chief Justice, but I also believe that in general there are significant differences between judges appointed by liberal and conservative presidents. This is especially true of the justices who sit on the Supreme Court.

Academic researchers who study the ideological alignment of Supreme Court justices have consistently found the political leanings of judges are very important, particularly in high-profile cases. Common sense and real-world experience also counsel that judicial politics matter. Indeed, if ideology made no difference in the way judges render decisions, we would never have stressed over Trump's nominations of Neil Gorsuch and Brett Kavanaugh.

I'm willing, however, to be proved wrong. And by the end of the Supreme Court's current term, Roberts, who is now the court's most prominent swing voter, will have an opportunity to do just that when he and his colleagues decide three cases that could determine whether Trump is immune from both congressional and state oversight:

In each of the cases, lower courts ruled against the president. The Supreme Court was under no obligation to review any of them, but agreed on Dec. 13 to review all of them at the president's request.

Although the Supreme Court could find a way to resolve the cases on narrow grounds, the cases have the potential to redefine both the separation of powers between Congress and the president and the distribution of authority between the federal government and the states.

The court could also use the cases to overturn or distinguish and restrict the longstanding precedents on executive privilege and presidential immunity established in United States v. Nixon (1974), and Clinton v. Jones (1997).

Both the Nixon and Clinton cases were the products of investigations similar to the current undertaking to impeach and remove Trump from office. In Nixon, the court ordered then-President Richard Nixon to turn over clandestine White House audiotapes to Watergate Special Counsel Leon Jaworski, rejecting Nixon's invocation of executive privilege. In the Clinton appeal, the court held that a sitting president is not immune from civil litigation initiated by a private party in federal court for acts done before taking office and unrelated to his official duties as president. Impeachment, the court noted, is the federal remedy for addressing a president's public misconduct.

Trump has made his position on expansive executive power unmistakably clear from his earliest days in office. Speaking at the Turning Point USA Teen Student Action Summit in Washington, D.C., in July, he famously claimed that under Article II of the Constitution, which sets forth the powers of the presidency, "I have the right to do whatever I want as president."

While Trump's mastery of the Constitution is meager and often downright embarrassing, the views of his primary legal advocate -- Attorney General William Barr -- are well-developed and dangerous.

As I explained in a previous Truthdig column, Barr is a leading proponent of the "unitary executive theory." Developed by right-wing legal scholars in reaction to Nixon's ouster, the theory dates back to the presidency of Ronald Reagan. It asserts, as University of Baltimore law professor Garret Epps has explained, that because the Constitution vests executive power in a single president, any attempt to limit the president's control over the executive branch is unconstitutional.

In its more robust iterations, the theory goes even further, verging on a platform of presidential supremacy. As professors Karl Manheim and Allan Ides of Loyola Law School in Los Angeles observed in an oft-quoted 2006 academic paper:

Related Topic(s): John Roberts; Judiciary; Trump; Trump Against Democracy; Trump Bully In Chief; Trump Judges, Add Tags
Add to My Group(s)
Go To Commenting
The views expressed herein are the sole responsibility of the author and do not necessarily reflect those of this website or its editors.