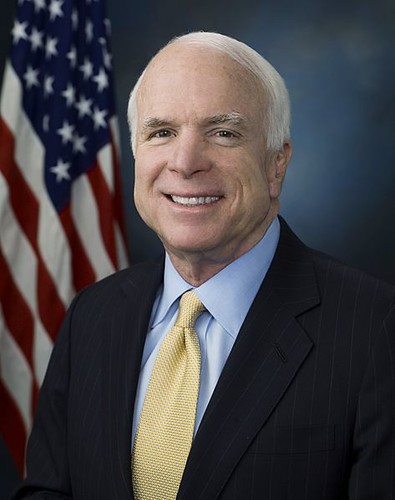 Senator John MCCain's office released a statement from the Mayo Clinic announcing that, after undergoing a procedure to remove a blood clot from above his left eye last week, "Subsequent tissue pathology revealed that a primary brain tumor ["]

His people HAD reported that he was going in for removal of a clot on his eye. But people on Twitter questioned that claim. The statement from his office confirms those suspicions.

McCain is reported to have a glioblastoma brain cancer.

Wikipedia provides this information about his cancer:

"Glioblastoma, also known as glioblastoma multiforme (GBM), is the most aggressive cancer that begins within the brain.[5] Signs and symptoms of glioblastoma are initially non-specific. They may include headaches, personality changes, nausea, and symptoms similar to those of a stroke. Worsening of symptoms is often rapid. This can progress to unconsciousness.

Typically treatment involves surgery after which chemotherapy and radiation therapy are used.

Despite maximum treatment, the cancer usually recurs. The most common length of survival following diagnosis is 12 to 15 months with less than 3% to 5% of people surviving longer than five years.[2][3] Without treatment survival is typically 3 months."

Related Topic(s): Cancer; John McCain, Add Tags
Add to My Group(s)
Go To Commenting
The views expressed herein are the sole responsibility of the author and do not necessarily reflect those of this website or its editors.