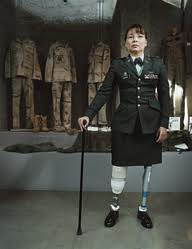 Using Senator John McCain as his foil to undermine Duckworth, Walsh smeared Duckworth's service and undermined her sacrifice. Americans nationwide, across ideology and political party, were disgusted by Walsh's comments:

I, too, was disgusted. I've long admired Tammy Duckworth. I've admired her since first learning her story. I even wrote about her in 2006 on the heels of her first Illinois Congressional campaign and subsequent defeat by Republican Peter Roskam - another non-veteran.

Today, having recently endured my own health challenges, I respect Tammy Duckworth even more. She's a hero of immeasurable - make that incomprehensible - dignity and strength.

Over the past eighteen months I've been challenged by Stage 4 Lymphoma, the difficult chemotherapy to treat it, and heart disease that required a stent in my right coronary artery. It's been an interesting journey and one I've been reluctant to discuss. I'm intensely private.

At this time, I'm happily in remission and feel no ill effects from the cancer, chemo or heart disease. Some may say what I faced was severe. At times in the throes of the chemo, I would have agreed. But by and large I've felt I had it rather easy (though my oncologist disagrees). I drove myself to and from treatments and walked into the infusion room on my own, while many around me were wheeled. Often while in my oncologist's lobby, or the chemo room, I filled with tears as fellow warriors battled their pain. I, too, was in pain, but somehow it seemed a lot less because I could control my own movement. I felt fortunate then. I feel fortunate now.

Today I ride my bicycle twelve miles to my oncologist and cardiologist. Other than the fog of chemo that has made it so difficult to write, I don't have much to complain about. I'm a very lucky woman.

I haven't written about any of this until now. I'm pathologically private. But I write of it now for a reason. I write of it now because as much as I believe I've stepped up to my challenges and met my personal expectations to prevail, I'm no Tammy Duckworth. I've never been to war. I've never dealt with amputation. I'm not challenged in my movements. I've returned to my former activities as though the last eighteen months weren't real. When the effects of the chemo diminished and I stopped being winded when I walked, I forgot my discomforts and returned to my regular life.

But it's not the same for Tammy Duckworth. She will deal with the ravages of war and the travails of amputation for the rest of her life. Yet amazingly - astonishingly - she prevails. Despite her irreparable wounds and her crutches and prostheses, Tammy Duckworth has endured the mental and physical challenges of the position of Assistant Secretary of Public and Intergovernmental Affairs for the United States Department of Veterans Affairs and two rigorous Congressional campaigns. No wonder she's so admired.

Considering the overwhelming condemnation Joe Walsh has received, it's fair to say that across the political spectrum, Americans share my regard for Tammy Duckworth. Veterans, in particular, are outraged at Walsh. Iraq War Veteran and Chairman of VoteVets.org PAC, Jon Soltz, even called for Walsh's resignation from Congress. But troublingly, John McCain, Walsh's singular foil in demeaning Tammy Duckworth, remains silent.

McCain, who's talked often of his military service both on and off the campaign trail, and of his special connection to vets, previously crossed party lines to support his fellow veterans. Most famously, during the Clinton administration, McCain worked closely with Democratic Senator and Vietnam veteran John Kerry on POW/MIA affairs.

If the military is truly non-partisan, wouldn't allegiance to veterans trump allegiance to party? I understand Senator McCain is presently in Afghanistan, but he's had ample time since Sunday to chastise Joe Walsh. Why hasn't he done so? It's not like he's been totally silent. He's tweeted the full spectrum from the Arizona Diamondbacks to his visit with the troops. Why not a tweet to defend Major Duckworth? After all, his was the name Joe Walsh mentioned. If he can tweet about baseball, he can certainly tweet about this.

Senator McCain, your fellow veteran has been attacked in your name. Will you step up to honorably defend her?

Only time will tell...

Related Topic(s): Afghanistan; Baseball; Cancer; Chemotherapy; Congress; Health; Heroism; Ideology; Iraq; John McCain; (more...) Lymphoma; Military; Republican; Veterans - Female, Add Tags  (less...)
Add to My Group(s)
Go To Commenting
The views expressed herein are the sole responsibility of the author and do not necessarily reflect those of this website or its editors.