Former secretary of state John Kerry waded into the controversy between Saudi Arabia and Qatar during a speech last week at the UK's Chatham House, coming down solidly on the side of the Saudis. Saudi Crown Prince Muhammad bin Salman has led a blockade of Qatar for the past several months, accusing his neighbor of supporting terrorist movements around the country and seeking to improve relations with Iran, a move that is somehow considered to be "dangerous" by the heavily-armed and well-trained Saudi military. Kerry's comments were supposed to show support for Saudi political reform. Instead, he embarrassed himself by endorsing authoritarianism and showing an utter lack of understanding of Middle Eastern politics.

Kerry told his audience, "I have great respect, frankly, for what the crown prince of Saudi Arabia and King Salman are trying to do to move Saudi Arabia into modernity. It's a huge lift, folks, a huge challenge to try to change those societies. Together with the Emiratis and others, they are taking a very firm stand against extremism that in its duplicitous form has been allowed to play a game out there." He added, "That's part of what this challenge with Qatar is about. It's not just about two nations in the region squabbling. It's about this bigger vision of where we are going and whether we are going to stop extremism." He made no mention whatsoever of the fact that 15 of the 19 September 11 hijackers were Saudis, nor did he discuss the fact that the Saudis have long supported Sunni extremist groups around the world. 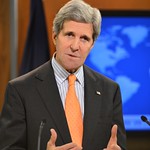 Kerry's comments could not have been any more misguided. First, Saudi Arabia's fight with Qatar goes back decades, ever since former Qatari emir Hamad bin Khalifa al-Thani decided to bring his tiny peninsular nation into the 21st century, and it has nothing to do with stopping extremism. Hamad decided that Qatar would be better off making its own way internationally. He began spending Qatar's vast natural gas wealth to develop the country, making it an economic competitor with Dubai and Abu Dhabi, and to chart an independent foreign policy.

Qatar would no longer tow the Saudi line, especially on Iran. Hamad thought it better to negotiate with the Iranians, to trade with them, and to open diplomatic relations. The Saudis did not approve. The Qatari establishment of the Aljazeera television news network, which routinely criticizes Saudi Arabia, ensured a generation of poor relations with Riyadh.

Kerry isn't wrong solely for pandering to the Saudis. His comments instead show two things: a fundamental misunderstanding of Saudi Arabia, its policies, and its internal politics; and a knee-jerk neoliberalism. Kerry is the same person who voted, when he was a US senator, for the war against Iraq, the same person who supported a never-ending war in Afghanistan, and the same person who voted consistently for what has become a permanent US military and intelligence presence in Pakistan. This "great thinker" of US foreign policy doesn't understand foreign policy at all.

What we're seeing in Saudi Arabia today is not an attempt to bring the country into modernity, nor is it enactment of a new anti-corruption policy, as the Saudis have claimed. Instead, it's a coup. Muhammad bin Salman, the king's son, deposed his cousin, Muhammad bin Nayif, and immediately began to put his personal imprimatur on the kingdom.

He has overseen Saudi Arabia's war against Yemen, a conflict that has resulted in what just about anybody would call genocide. He has disrupted Lebanese politics by apparently luring that country's prime minister to Riyadh and having him resign on Saudi television. He has supported Sunni extremist groups fighting against the Assad government in Syria. And he has rounded up and placed under house arrest as many as 2,000 of his subjects, including senior Saudi princes, current and former cabinet ministers, and leading businessmen -- essentially anybody who might oppose him in the future. (The rumor here in Washington is that King Salman will abdicate in Muhammad's favor soon after the new year.)

Oh, and Muhammad announced that next year women will be allowed to drive, the "modernization" that apparently attracted the attention and support of John Kerry.

I worked for John Kerry on the Senate Foreign Relations Committee for two-and-a-half years. He was absolutely obsessed with his legacy. Once, during a committee hearing, he turned in his chair and handed me a note saying, "Can you get me a map of Somalia?" I went into the anteroom and got him his map. I then tossed the note in a nearby trash can. Two hours later I received a call from his personal office. "What did you do with the senator's note?" "What note?" I asked. "He handed you a note during the hearing. What did you do with it?" "I threw it in the trash," I responded. "He just asked me for a map of Somalia." "Well," the aide said, "we need that note. We have to send it to the University of Massachusetts as part of his archives." The only response I could come up with was, "You're kidding, right?" "No," was the response. "It's in case a future PhD candidate needs to see it for research. All researchers need to know what kind of senator he was."

Legacy or no, the problem is that, after decades in the House of Representatives and the Senate, and after four years as Secretary of State, Kerry can't spot an authoritarian takeover, a soft coup, when he sees it. Or perhaps he supports it. I don't know. But his comments at Chatham House certainly fit in well with his neoliberal pro-war personal ideology. Let's see what he says about the Saudis when the war with Iran finally breaks out. That's the Saudis' end game, after all.

Related Topic(s): John Kerry; King Salman Of Saudi Arabia; Legacy; Saudi Embassy, Add Tags
Add to My Group(s)
Go To Commenting
The views expressed herein are the sole responsibility of the author and do not necessarily reflect those of this website or its editors.