Click Here to Remove All Ads
Cross-posted from The Guardian
Reflecting the Obama legacy and US culture, the Time columnist says: "the bottom line is: 'whose 4-year-olds get killed?'" 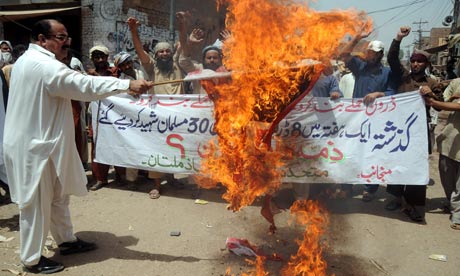 (Image by Unknown Owner)   Details   DMCA
People burn a mock US flag as they shout slogans during a protest against US drone attacks in Multan, Pakistan, last June. Photograph: Mk Chaudhry/EPA

On MSNBC's Morning Joe program this morning, which focused on Monday night's presidential debate, the former right-wing Congressman and current host Joe Scarborough voiced an eloquent and impassioned critique of President Obama's ongoing killing of innocent people in the Muslim world using drones. In response, Time Magazine's Joe Klein, a stalwart Obama supporter, offered one of the most nakedly sociopathic defenses yet heard of these killings. This exchange, which begins at roughly the 7:00 minute mark on the video embedded below, is quite revealing in several respects.

Here are the relevant portions of the exchange, which was triggered when regular guest Mike Barnicle announced how amazing he found it that so little public attention and debate is paid to the fact that Obama simply kills whomever he wants "without any kind of due process":

SCARBOROUGH: "What we're doing with drones is remarkable: the fact that over the past eight years during the Bush years -- when a lot of people brought up some legitimate questions about international law -- my God, those lines have been completely eradicated by a drone policy that says: if you're between 17 and 30, and within a half-mile of a suspect, we can blow you up, and that's exactly what's happening ... They are focused on killing the bad guys, but it is indiscriminate as to other people who are around them at the same time ... it is something that will cause us problems in the coming years." ...

KLEIN: "I completely disagree with you....It has been remarkably successful" --

KLEIN: "At decimating bad people, taking out a lot of bad people -- and saving Americans lives as well, because our troops don't have to do this ... You don't need pilots any more because you do it with a joystick in California."

There are several points worth noting about this exchange:

(1) Klein's justification -- we have to kill their children in order to protect our children -- is the exact mentality of every person deemed in US discourse to be a "terrorist." Almost every single person arrested and prosecuted over the last decade on terrorism charges, when asked why they were willing to kill innocent Americans including children, offered some version of Joe Klein's mindset.

Here, for instance, is what the Pakistani-American Faisal Shazad said after he pled guilty to attempting to detonate a bomb in Times Square, in response to an angry question from the presiding US federal judge as to how he could possibly be willing to kill innocent children:

"I am part of the answer to the U.S. terrorizing the Muslim nations and the Muslim people. And, on behalf of that, I'm avenging the attack. Living in the United States, Americans only care about their own people, but they don't care about the people elsewhere in the world when they die."

Related Topic(s): Children; Drone Wars; Killing; Slaughter, Add Tags
Add to My Group(s)
Go To Commenting
The views expressed herein are the sole responsibility of the author and do not necessarily reflect those of this website or its editors.