Kennedy, fluently bi-lingual, served in the Peace Corps in the Dominican Republic from 2004-2006.

According to the wiki, "While in school, Kennedy worked for the Harvard Legal Aid Bureau, providing legal aid to low-income tenants with foreclosure cases in the wake of the 2008 financial crisis."

...it would be easy to dismiss this past years as chaos. Partisanship as politics, but it is far, far bigger than that.

This administration isn't just targeting the laws that protect us, they are targeting the very idea that we are all worthy of protection.

For them, dignity isn't something you are born with, but something you measure by your net worth, your celebrity, your headlines, your crowd size. Not to mention, the gender of your spouse, the country of your birth, the color of your skin, the God of your prayers.

Their record is a rebuke to our highest American ideal - the belief that we are all worthy, that we are all equal, that we all count in the eyes of our law and our leaders, our God and our government. That is the American promise. 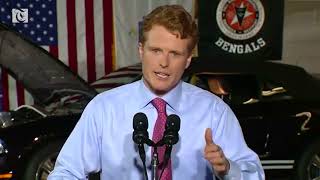 Bullies may land a punch, they may leave a mark, but they have never, not once, in the history of our United States, managed to match the strength and spirit of a people united in defense of their future.

That is the measure of our character. That is who we are. Out of many, one.