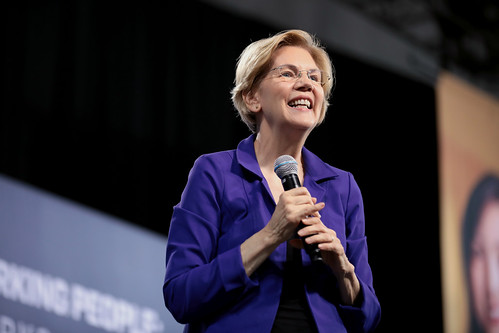 Duluth, Minnesota (OpEdNews) March 7, 2020: I have a subscription to the electronic version of the New York Times, because I like their articulate news coverage and I often find their op-ed commentators thought-provoking to read, even if I do not always find them convincing. But I only expect op-eds to be thought-provoking, because they may help nudge me along in the process of possibly formulating my own position on a certain issue under discussion.

But then-candidate Donald Trump (born in 1946) campaigned in 2016 against political correctness -- among other things.

Now, in the collective spirit of gatekeepers and guardians of properly understood liberal politics in the United States, the Editorial Board in January endorsed not one candidate but two in the Democratic primary: (1) Senator Elizabeth Warren (born in 1949) of Massachusetts and (2) Senator Amy Klobuchar (born in 1960) of Minnesota. Neither of whom attracted an overwhelming number of voters in the early primaries or an overwhelming number of financial donors.

Perhaps the Editorial Board even imagined those two women senators as emerging on a ticket together for the general election Warren for president and Klobuchar for vice president as a way to unite the Democratic Party in the 2020 presidential election against the Republican Party's incumbent candidate. After all, women collectively may constitute the majority of Democratic voters, so a Democratic ticket headed by two women may not seem to be an unimaginable dream in the Editorial Board's view of the 2020 presidential election.

In the Democratic debates, Warren was fierce in her attacks on former Mayor of New York Mike Bloomberg (born in 1942). No doubt she can be a fierce debater. Bloomberg did not do well on Super Tuesday, so he ended his bid to become the Democratic Party's presidential candidate in 2020. Subsequently, Warren also ended her bid but without endorsing either front runner for now. Of course, she could later endorse somebody.

Even though Bloomberg's massive advertising campaign before Super Tuesday did not pay of for him as a candidate, it may have boosted voter turnout on Super Tuesday, and it may also have helped former vice president Joe Biden (born in 1942), because Bloomberg's ads featured former President Barack Obama.

Now, individual members of the Editorial Board may occasionally publish op-eds under their own individual bylines, in which cases the individual is simply identified as a member of the Editorial Board. This brings me to Michelle Cottle's latest bylined op-eds: (1) "Elizabeth Warren Had a Good Run. Maybe Next Time, Ladies" (dated March 5, 2020); (2) "When Will We Be Ready for a President Warren? Michelle Cottle joins readers in mourning the end of a dream for 2021" (dated March 6, 2020); and (3) "The Resurrection of Joe Biden: He's alive, but he still needs some work" (dated March 6, 2020).

Hey, but don't all of us who are still alive need some work, including perhaps Michelle Cottle? But perhaps she did not write that part of the headline.

But she did write the opening sentence: "Joe Biden's presidential candidacy is back from the dead." Of course, Christians around the world today are preparing for Easter the commemoration of how the historical Jesus died and then supposedly came back to life in what is now known as his resurrection. My, oh my, Biden is a practicing Catholic. But was his candidacy really "dead" before the South Carolina primary and then Super Tuesday? Or did Cottle just like to use a little hyperbole, eh?

Of course, it would be a serious violation of the norms of political correctness for a member of the Editorial Board of the New York Times to criticize the African Americans in South Carolina who gave Biden such a surprising victory in the primary there perhaps by criticizing their apparent dreams in voting for Biden as expressing their nostalgia for the normalcy and goodwill they associate with President Obama.

Going into the South Carolina primary, Biden, Sanders, Warren, Klobuchar, and Pete Buttigieg (born in 1982) were still the front-runners as white contenders to be the Democratic Party's presidential candidate in 2020. The white front-runners represented, in one way or another, the big dreams of progressives and liberals in the Democratic Party. For many African American voters in South Carolina, Biden evidently represents their dreams of a restoration of normalcy and goodwill they associate with President Barack Obama a restoration that is now needed to defeat President Trump in the 2020 presidential election.

Related Topic(s): Burisma; Democratic; Democrats; Election; Liberals; Media; Nostalgia; Nostalgia; Politics; Primaries; (more...) Primary; Republican; Trump; Ukraine; Women, Add Tags  (less...)
Add to My Group(s)
Go To Commenting
The views expressed herein are the sole responsibility of the author and do not necessarily reflect those of this website or its editors.