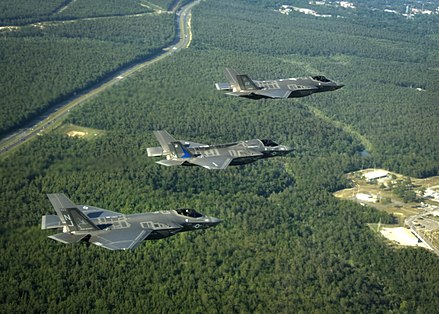 US President Joe Biden rolled out his 2022 federal budget request on May 28, surprising no one with his proposals for lavish expenditures on education, healthcare, and infrastructure, or with his promise that only the rich will be soaked to pay for it all (the $1.8 trillion projected deficit will be borrowed in your name, but you're not supposed to notice).

Given that the US is drawing down its 20-year war in Afghanistan, one might expect some kind of peace dividend on the mis-named "defense" line of the proposal, but no such luck.

Biden proposes an increase of "only" 1.7%, to $715 billion, with "only" eight new warships instead of the 12 called for in the Navy's shipbuilding plan. Biden also wants to "invest" in 85 more F-35 Lightning combat aircraft, one of the US "defense" industry's favorite white elephants.

US Senator Lindsey Graham (R-SC) calls the general budget proposal "insanely expensive," but also gripes that "over time it will result in a weakened Department of Defense."

In mid-May, anticipating the possibility that Biden might not offer to forklift much larger pallets of new cash into "defense" contractors' getaway trucks, US Representative Liz Cheney (R-WY) declared that failing to increase US military spending by 3-5%, above and beyond inflation, would be a "red line" for Republicans.

Let's be clear on one thing: The US "defense" budget has little to do with defense. If it was really about defense, it could be cut by 90% and still be bloated.

The US "defense" budget is about two things: Redistributing wealth from your wallet to the bank accounts of "defense" contractors, and trying unsuccessfully to rule the world.

On the former front, if it was really about defense, US Coast Guard ships would be patrolling the US coast, not the Iranian coast, and a much smaller force of US military personnel would have spent the last 20 years in places like Texas and Vermont rather than in Iraq, Afghanistan, Somalia, Syria, etc.

On the latter front, it's no coincidence that, as Reuters reports, "Senators and governors have come out to support the[F-35] which has a huge industrial base." That is, a base of generous campaign contributors who also create artificial "jobs" in the Senators' and governors' states, building something for which there's no real market demand but which you can be forced to buy whether you want it or not.

"All the armies of Europe and Asia," Abraham Lincoln said in 1838, "could not by force take a drink from the Ohio River or make a track on the Blue Ridge in the trial of a thousand years." He was right then, and even with an actual defense budget one tenth the current size of the military budget, he'd be right today.

The US "defense" budget is a transparent scam. It's disappointing, but not especially surprising, that Joe Biden is an only slightly less aggressive con artist than his Republican counterparts.

Related Topic(s): Budget Bill; Defense Contracts; Dept Of Defense DOD; Joe Biden; Military Budget, Add Tags
Add to My Group(s)
Go To Commenting
The views expressed herein are the sole responsibility of the author and do not necessarily reflect those of this website or its editors.