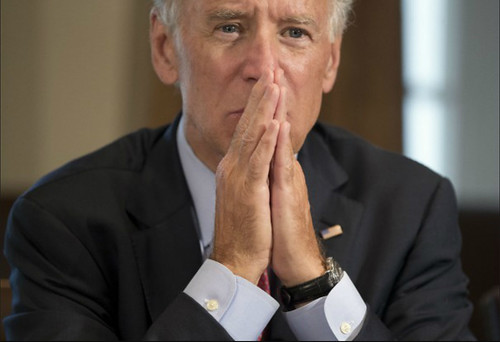 Former Vice-President Joe Biden wrote an op-ed today in the Washington Post in which he excoriates Trumpcare. He tells the story of how Obamacare gave security and peace of mind to millions of Americans and how Trump and the Republicans are trying to take that away.

"As vice president, I met with Americans all across our country. What they told me over and over is that the Affordable Care Act gave them peace of mind -- that if they got sick, or if their child got sick, they could get care and not have to worry about going broke as a result. They no longer had to lay awake at night wondering: Can I pay for this treatment? What happens if she gets cancer? How will I feed my family and afford the care?

"They told me that because when the ACA became law and health-care coverage was extended to millions of people, it meant we had finally decided, as a nation, that health care is a right for all and not a privilege for the few.

"Republican leaders in Congress believe the opposite. And if they take that peace of mind away, they'll have to look Americans in the eye and explain to them that they have to start worrying again.

"They want to drag us back to a time -- not all that long ago -- when Americans could be denied basic health care because they were unable to afford it. That's the reality of where we are today and it's enough to make your blood boil.

"In my 36 years as a senator, I saw my colleagues take plenty of hard votes. This just isn't one of them. If Republican leadership wants to improve the ACA, let's first come to an agreement that everyone should have health coverage. Then, based on that premise, let's have a debate about how best to improve care and reduce costs. Let's again make the commitment that in America, health care is a right for all, not a privilege for the wealthy."

Related Topic(s): Health; Privilege; Republican; Trumpcare, Add Tags
Add to My Group(s)
Go To Commenting
The views expressed herein are the sole responsibility of the author and do not necessarily reflect those of this website or its editors.