Biden thinks fracked gas is an acceptable way to reduce emissions. He is too stuck in the past to be a credible standard-bearer for the Democratic party 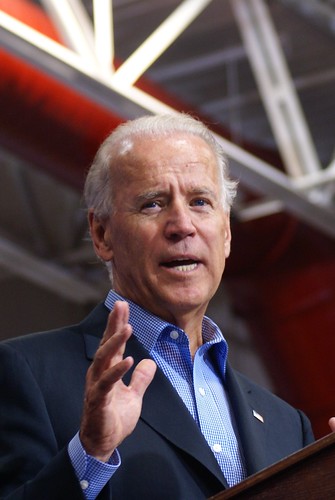 A Reuters story Friday morning said that Biden's energy policy team was looking for what the reporter called a "middle ground" on climate change, and in particular that it planned to rely on expanding the use of fracked natural gas as a way to reduce emissions. This is, to put it plainly, a return to the all-of-the-above energy strategy that marked the Obama years, and a terrible idea.

As is now entirely clear, increasing fracking increases the flow of methane to the atmosphere, and since methane is a potent greenhouse gas it drives up the rate of global warming. In the early days of the Obama years, when we knew far less about the chemistry of methane, it was a perhaps-defensible plan; in 2019 it's embarrassing, the equivalent of idling your muscle car outside the Earth Day picnic. There is no "middle ground" on climate change -- there's only meeting the demands of physics and chemistry (and justice), or watching the temperature soar.

A few hours after the story, as environmental activists (and primary opponents) tweeted their dismay, the Biden team seemed to blush. Biden's energy adviser Heather Zichal said that the Reuters reports were wrong, and that instead he planned to "enact a bold policy to tackle climate change in a meaningful and lasting way." But the fact that it was Zichal making the statement essentially confirmed the accuracy of the original story: in the early Obama years, she'd headed up an inter-agency working group to promote the development of domestic natural gas.

The working group had been formed after pressure from the American Petroleum Institute, the chief fossil-fuel lobbying group, and Zichal, in a talk to an API gathering, said: "It's hard to overstate how natural gas -- and our ability to access more of it than ever -- has become a game changer." Zichal left her White House job in 2013; one year later, she took a gig on the board of Cheniere Energy, a leading exporter of fracked gas, which has earned her over a million dollars.

And Zichal said Biden was also turning for advice to former energy secretary Ernest Moniz, who oversaw the rise of the United States to its position as the biggest oil and gas producer on the planet and continues to recommend natural gas development, and Frank Verrastro, co-author of a report on fracking that found no "unmanageable risk that would require widespread reconsideration of current recommended practices." In short, he's relying on people deeply attached to the status quo.

The timing of the gaffe couldn't have been more stunning -- it came just 72 hours after the UN released a report pointing out that climate change would help wipe out a million species in the decades ahead. Secretary of State Michael Pompeo later that day lauded the rapid melt of the Arctic, saying it would increase access to gold and diamonds, not to mention make it easier to ship junk from China. You couldn't have asked for a much better opportunity to draw a contrast, not search for a "middle ground."

As recently as 2016, climate was seen as a losing issue. It was a distant problem, with unclear consequences, that would require huge sacrifices to solve. But then California caught fire, Puerto Rico got ravaged by a hurricane, and people woke up to the fact that this was clear and present danger. The IPCC report hammered home the threat. And with ideas like the Green New Deal gaining prominence, people have understood that solving the problem won't require sacrifice as much as it will create opportunity. Why would we stay in the "middle of the road" when the left lane promises solutions that will not only help the climate, but also our economy, public health, and national security?

But Biden's team apparently is fixated on the relatively small number of workers in the building trades unions who want to keep on constructing natural gas pipelines (and perhaps, since he hasn't signed the No Fossil Fuel Money pledge, on big donors from the hydrocarbon sector). This is old-school thinking at its best: throw young voters, overwhelmingly fixated on climate change, under the dirty diesel bus in an effort to win a narrowing pool of union leaders, who gathered in the Oval Office with Trump to celebrate in the early days of his presidency.

Obviously Biden will be better than Trump on this (and every other) issue; obviously everyone who cares about the earth should support him if he's the nominee. (That paramount need is why I've been running the #DemUnityTwitterProject these past weeks). And he's got time to turn his policies around -- I remember when he gave a wink and a nod support to those fighting the Keystone pipeline, well in advance of Obama's eventual veto of the project. His credibility with union workers is understandably high, which is why he would be the perfect person to push for large-scale retraining programs for clean energy jobs.

But for now Biden has done precisely the thing you'd think he'd be trying his hardest to avoid: showing that he's stuck in the dirty energy past. If he's going to mount a serious challenge to Trump, he's going to need the huge number of Americans for whom climate change has become the issue. On the biggest issue our civilization's ever faced, we need him thinking like it's 2030, not 2010.

At this critical time ... we can't turn away from climate change. The Guardian's environmental coverage reports the scientific facts, social consequences and political choices that are shaping the fate of our planet. As the world's leaders turn their backs on the environment, we are at a crisis point. Individual consumer choices are important, but we need collective action to achieve the systemic change that will really make a difference. Our pioneering and our fearless reporting on the environment can play a vital role in that. But we need our readers' support.

Bill McKibben is the author of a dozen books, including The End of Nature and Deep Economy: The Wealth of Communities and the Durable Future. A former staff writer for The New Yorker, he writes regularly for Harper's, The Atlantic Monthly, and The (more...)
Related Topic(s): Climate Change; Climate Crisis; Fracking; Joe Biden, Add Tags
Add to My Group(s)
Go To Commenting
The views expressed herein are the sole responsibility of the author and do not necessarily reflect those of this website or its editors.