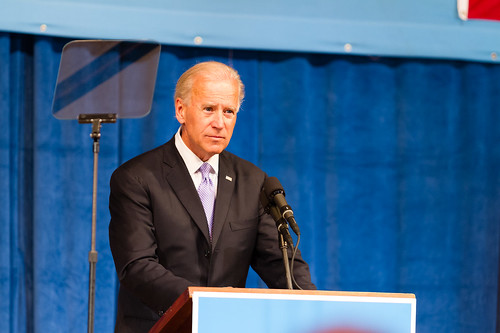 Keene State College: Joe Biden
(Image by Tschi)   Details   DMCA
Joe Biden just put a spotlight on his mindset when he explicitly refused to apologize for fondly recalling how the Senate "got things done" with "civility" as he worked alongside some of the leading racist lawmakers of the 20th century. For Biden, the personal is the political; he knows that he's virtuous, and that should be more than good enough for African Americans, for women, for anyone.

"There's not a racist bone in my body," Biden exclaimed Wednesday night, moments after demanding: "Apologize for what?" His deep paternalism surfaced during the angry outburst as he declared: "I've been involved in civil rights my whole career, period, period, period."

Biden has been "involved" in civil rights his "whole career" alright. But at some crucial junctures, he was on the wrong side. He teamed up with segregationist senators to oppose busing for school desegregation in the 1970s. And he played a leading role while pandering to racism with a shameful Senate floor speech for passage of the infamous 1994 crime bill that fueled mass incarceration.

Such aspects of Biden's record provide context for his comments this weekpraising an era of productive "civility" with the virulent segregationist Dixiecrat Senators Herman Talmadge of Georgia and James Eastland of Mississippi (known as the "Voice of the White South"), who often called black people "an inferior race."


To Biden, any assessment of his past conduct that clashes with his high self-regard is unfair; after all, he really means well. On the campaign trail now, his cloying paternalism is as evident as his affinity for wealthy donors.

Biden shuttles between the billionaire class and the working class funded by the rich while justifying the rich to everyone else. His aspirations are bound up in notions of himself as comforter-in-chief.

"I get it, I get it," Biden said during his brief and self-adulatory non-apologyvideo in early April to quiet the uproar over his invasive touching of women and girls. He was actually saying: I get it that I need to seem to get it.

"I want to talk about gestures of support and encouragement that I've made to women and some men that have made them uncomfortable," Biden said in the video. "In my career I've always tried to make a human connectionthat's my responsibility, I think. I shake hands, I hug people, I grab men and women by the shoulders and say, 'You can do this'. . . It's the way I've always been. It's the way I've tried to show I care about them and I'm listening."

Weeks later, appearing on ABC's The View, he declared: "I have never in my life, never, done anything in approaching a woman that has been other than trying to bring solace." It was not a credible claim; consider Lucy Flores, or the countless other women and girls he has intrusively touched over the years.

For several decades, Biden has made his way through the political terrain as a reflexive glad-hander. But times have changed a lot more than he has. "What the American people do not know yet is whether Biden has actually internalized any of the blowback he's earned over the years for his treatment of women," journalist Joe Berkowitz wrote last week. "So far, it's not looking good."

What's also looking grim is Biden's brazen adoration of wealthy elites who feed on corporate power. His approach is to split the rhetorical difference between the wealthy and the workers. And so, days ago, at a fundraiser filled with almost 180 donors giving his campaign the legal limit of $2,800 eachan event where he tried and failed to get funding from a pro-Trump billionaireBiden declared: "You know, you guys are great but Wall Street didn't build America. You guys are incredibly important but you didn't build America. Ordinary, hard-working, middle-class people given half the chance is what built America."

The formula boils down to throwing the "hard-working middle class" some rhetorical bones while continuing to service "you guys" on Wall Street. Given his desire to merely revert the country to pre-Trump days, no wonder Biden keeps saying that a good future can stem from finding common ground with Republicans. But for people who understand the present-day GOP and really want a decent society, Biden's claims are delusional.

Related Topic(s): Joe Biden; Presidential Race 2020; Segregation, Add Tags
Add to My Group(s)
Go To Commenting
The views expressed herein are the sole responsibility of the author and do not necessarily reflect those of this website or its editors.