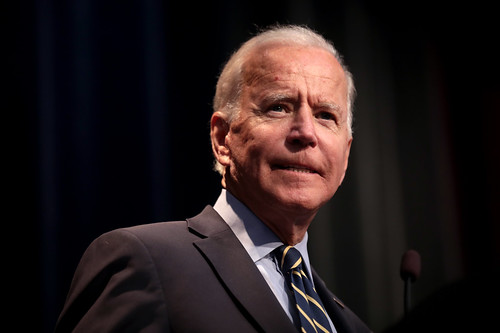 Whatever our political differences, vast numbers of Democrats and others agree that it's imperative to defeat Donald Trump. But with scarcely five months to go before the voting starts, Joe Biden is not helping to assemble a broad tactical alliance. Instead, he's ignoring the wisdom that Jesse Jackson offered at the Democratic National Convention in 1988: "It takes two wings to fly."

Right now, Biden is idling in the cockpit of a political aircraft with one wing.

As chair of the Democratic National Committee at a time when the party's presumptive nominee for president seems likely to crash and burn, you should be openly working to fix the problem rather than merely proclaiming that Biden is a great candidate.

Indications are profuse that Biden is proceeding with a business-as-usual campaign while elevating establishment figures. His rhetorical nods toward Bernie Sanders supporters have been notably superficial, while the nitty-gritty of policy is being placed in corporate hands.

On April 27, The Nation summed up one of the latest ominous signs: "Larry Summers is a dead albatross around Biden's neck. Why should we believe Biden's promises of progressive reforms, when he seeks out the advice of this plutocrat-loving economist?"

I have often heard you talk about the "north star" of party principles. Surely that must involve democracy. Yet the cancellation of the New York presidential primary is a flagrant Machiavellian maneuver by that state's Democratic Party leadership.

"This means that our campaign will receive no delegates from New York, weakening our ability to fight for a progressive platform and progressive rules at the Democratic convention," the Sanders campaign pointed out in a statement on April 29. "It also means our voters are less likely to turn out, which will hurt progressive New York candidates who are still facing primaries." Using the pandemic as an excuse for the cancellation was clearly bogus, since the entire New York election on June 23 could be conducted by mail.

The corrosive ill will created by such machinations heightening progressives' distrust of the Democratic Party will weaken support for the Biden general-election campaign across the country. As the Sanders campaign put it, what Democratic Party power brokers did in New York "is an outrage, an assault on democracy."

But where is your voice to challenge this "assault on democracy"? The corporate cats seem to have your tongue. With silence, you're an enabler of this travesty. You should firmly declare that New York will be stripped of all its national-convention delegates unless this decision is reversed and the state's presidential primary is reinstated.

A related situation looms in California and some other states, threatening to deny Sanders his statewide allocation of delegates beyond congressional districts. The threat involves undemocratically depriving Sanders of delegates that he and millions of people who voted for him are entitled to. But again, your voice is silent.

You might think it's all well and good for you to claim a "hands off" approach of deferring to decisions by state party leaders. But in mid-March you didn't hesitate to flatly proclaim that Illinois, under a Democratic governor, should go ahead with an in-person presidential primary election, thereby aiding Biden's momentum to widen his delegate lead over Sanders. To the detriment of public health, you publicly and emphatically sought to influence a state decision about a Democratic primary.

But now, your enabling silence is conspicuous as hundreds of duly elected Sanders delegates are in jeopardy nationwide.

Related Topic(s): Biden Endorsement; Democratic; Election; Joe Biden; Open Letter; Tom Perez, Add Tags
Add to My Group(s)
Go To Commenting
The views expressed herein are the sole responsibility of the author and do not necessarily reflect those of this website or its editors.