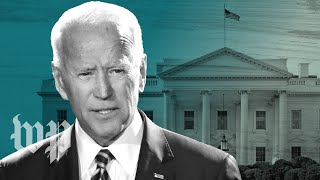 Besides being a grabby old coot who needs to stop joking about complaints over his serially inappropriate touching of females, Joe Biden is a grinning neoliberal sell-out who stands well to the right of majority progressive public opinion. No elegantly crafted three-and-a-half minute campaign launch video on the horrors of Charlottesville and Donald Trump can change that essential fact.

The media trope that portrays "Lunch-Bucket Joe" Biden as a regular, down-to-earth guy who cares deeply about regular folks is pure, unadulterated bulls*it. His real constituents wear pinstripe suits and works on Wall Street and in corporate headquarters. They fly around in fancy private jets. And the supposed "everyman liberal" Joe Biden is their loyal apparatchik.

"The Folks at the Top Aren't Bad Guys"

It's not for nothing that Biden relies on big money backers, not small and working-class donors and that he is an especially close ally and beneficiary of Washington lobbyists. He has spent decades ripping on progressive "special interests" while joining with Republicans to advance policies harmful to the working-class.

In 1978, Biden worked for Wall Street by voting to rollback bankruptcy protections for college graduates with federal student loans. Six years later he did the same to vocational school graduates. In 2005, he worked with Republican allies to pass the Bankruptcy Abuse Prevention and Consumer Protection Act, which put traditional "clean slate" Chapter 7 bankruptcy out of reach for millions of ordinary Americans and thousands of small businesses. The bill put bankruptcy filers under far stricter Chapter 13 rules, turning countless citizens into de facto indentured servants of finance capital (including the many credit card companies headquartered in Delaware.) Biden backed an earlier version of the bill that was too corporatist even for Bill and Hillary Clinton.

He voted against a bill that would have compelled credit card companies to warn customers of the costs of only making minimum payments.

In 1979, Biden recognized campaign donations from Coca-Cola by cosponsoring a bill that permitted soft-drink producers to skirt antitrust laws. That same year he was one of just two Congressional Democrats to vote against a Judiciary Committee measure to increase consumers' rights to sue corporations for price-fixing.

Biden strongly supported the 1999 Gramm-Leach-Bliley Act, which permitted the re-merging of investment and commercial banking by repealing the Depression-era GlassSteagall Act. This helped create the 2007-8 financial crisis and subsequent recession.

All of this and more in Biden's record is richly consistent with the beginning of his political career. He's been an unapologetic corporatist from the start. As Branko Marcetic noted on Jacobin last summer:

"In 1984, the Washington Post specifically named him, along with Gary Hart and Bill Bradley, as one of the best-known figures among that era's Democratic Party's 'neo-liberals,' who 'singled out slimming the role of government and pushing new technology.' Biden built his career advertising himself as someone who refuses to toe the progressive line. He proudly boasted of defying liberal orthodoxy on school busing, for instance. But throughout his career, that boast has most often taken the form of bashing liberal 'special interests.' Biden toured the country in 1985 chiding...unions and farmers for being too narrowly focused, and complained that Democrats too often 'think in terms of special interests first and the greater interest second.' In the latter case, Biden was specifically complaining about their opposition to his calls for a spending freeze on entitlements and an increase in the retirement age." (emphasis added).

Biden is so corporatist and pro-Wall Street that he can't join the other corporate (neo) liberals in the 2020 presidential horse race in playing what a still-Left Christopher Hitchens once called (in a sharp volume on the neoliberal Clintons) "the essence of American politics -- the manipulation of populism by elitism." Biden won't deign to pay lip-service to populism. Indeed, he has billed himself the "anti-populist" the antidote to both the right-wing reactionary populism of Trump and the leftish progressive populism of Bernie Sanders.

Biden absurdly criticizes those who advocate a universal basic income of "selling American workers short" and undermining the "dignity" of work. He opposes calls for free college tuition and Single Payer health insurance. He defends Big Business from popular criticism, writing in 2017 that "Some want to single out big corporations for all the blame. ... But consumers, workers, and leaders have the power to hold every corporation to a higher standard, not simply cast business as the enemy."

That's called blaming the working-class victim. It's also called propagating a fantasy the existence of a political system in which the working-class majority has the power to hold concentrated wealth and power accountable.

Paul Street (www.paulstreet.org and paulstreet99@yahoo.com) is the author of Empire and Inequality: America and the World Since 9/11 (2004), Racial Oppression in the Global Metropolis (2007), Barack Obama and the Future of American Politics (more...)
Related Topic(s): Corporate; Corporatists; Democrats; Election; Fascism; Imperialism; Money; Socialism, Add Tags
Add to My Group(s)
Go To Commenting
The views expressed herein are the sole responsibility of the author and do not necessarily reflect those of this website or its editors.