Stabbings by an ultra-orthodox fanatic of pride parade participants, assault of anti-banksters demonstrators by private goons, hired by tycoons... and the strange failure of the security forces of the total security state in both cases... Jerusalem under Israeli rule is far removed from what it was intended to be by international law as Corpus Separatum Jerusalem.
____
Jerusalem, July 30 -- tonight the Jewish calendar marked the equivalent of Valentine's Day. It was marked by two very different events -- both marred by violence, and both raising questions about police and security forces conduct. Both events started around 6:00 pm about 500 yards from each other in the Mamilla complex in the center of Jerusalem.

Pride and Tolerance parade
The event was secured by massive Israel Police forces, given the history of violence against Pride parades in Jerusalem in past years, including the stabbing of participants in 2005. That was also the reason for the inclusion of "Tolerance" in the name of the Jerusalem event. The event was clearly different from its Tel-Aviv counterpart by the participation of various, organized political groups, mostly left-wing, and its generally much more conservative nature. 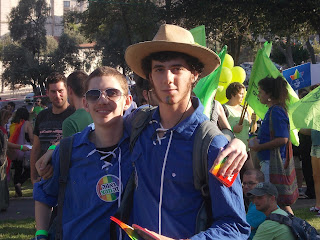 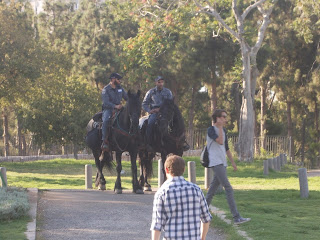 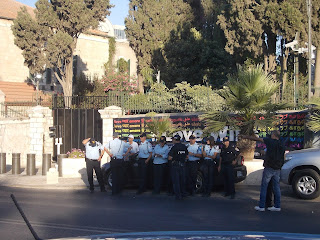 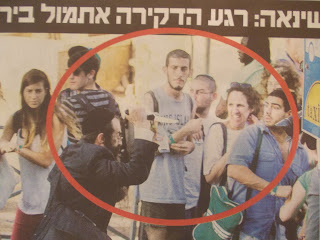 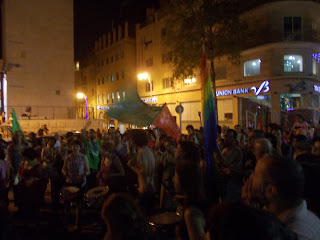 Copyrighted Image? DMCA
Pics: Stabbing attack by Schlissel today (Yediot); Schlissel's arrest after the stabbings of Pride parade participants on July 30, 2015, and in 2005.
(Haaretz) Late night demonstration after the stabbings, "pride, no fear".
_____
The event ended with with 6 participants being stabbed by an orthodox Jewish fanatic, Yishai Schlissel. Two of the victims were seriously wounded.
Schlissel is the same person, who stabbed Pride parade participants in Jerusalem 10 years ago, and was only recently released from prison. According to media, immediately after his release, he started inciting for violence in order to prevent this year's Jerusalem parade from taking place, including posting street notes calling for violence, and interview with an ultra-orthodox radio show. [i]
In a total security state, the fact that no measures were taken against Schlissel, in view of such open incitement for violence, must raise serious questions. It immediately brings to mind the failure, or even collusion of Jewish division of the Shin-Bet in the case of prime minister Rabin assassination in 1995. [ii]
The stabbings in the Jerusalem Pride parade also undermined the pink-washing efforts of the Israeli government, trying to present Israel as a tolerant, civil society, through the widely advertised Pride events in Tel-Aviv. [iii]
Pic: Night-time demonstration after the stabbings in the Pride and Tolerance parade.
_______________

Direct action by an anti-banksters group
The small demonstration was conducted in front of the nearby Mamilla Hotel -- where the families of two tycoons, Yitzak Tshuva and Zion Keynan were united through the matrimony of their kids. The event was dubbed by the demonstrators "The Wedding of Thieves"... The group notes the actions of the banksters and tycoons against families, which do not spare their kids, and therefore aims at disrupting the routine lives of tycoons and their direct family members through demonstrations, wherever they appear. 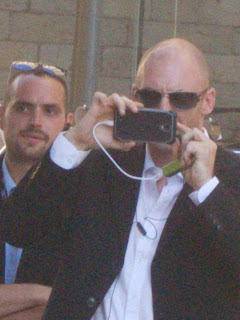 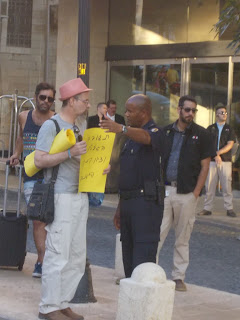 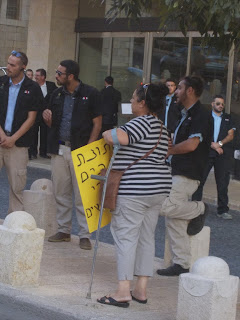 Copyrighted Image? DMCA
Pics: "Wedding of Thieves" demonstration in Jerusalem by an anti-banksters direct action group.
____
Yitzhak Tshuva is one of a handful of Israeli tycoons, [iv] who according to former Israeli Treasury Minister Lapid, control the economic policies of the Israeli government. Lapid, who was elected on a reformist agenda on the wave of social protest of 2011-2, made such statements only after the collapse of the previous government, in order to justify his failure to perform...
Tshuva gained notoriety with the Israeli social protest movement, particularly for two main reasons:
Tzion Keynan is the top executive of Bank HaPoalim, Israel's largest bank, controlled by the Arison tycoon family. [vii] Former top executive of the bank, Dan Dankner, served a prison term for bank fraud. The bank is also notorious for its rampant fraud on debtors in the courts, similar to the foreclosure fraud crisis in the United States. [viii]
More recently, Keynan gained notoriety for a bizarre gag order on the direct action group leader, Attorney Barak Cohen, issued through a night-time hearing in the Tel-Aviv court's bomb shelter, off the court calendar... [ix] Likewise, a small news item, pertaining to the planned direct action event tonight was removed from the internet, according to the group - after threats on the news outlet by Keynan's operatives. [x]
The demonstrators initially numbered only about 5 activists, and later no more than 20. There was only one policeman on location, but about 20 goons, apparently hired by the tycoons, most of them in security company uniform, but some in plain clothes. The demonstrators stood on the side-walk carrying signs "Wedding of the Thieves", and yelled, but were disciplined and deliberately non-violent. Some of the wedding party guests looked down from time to time from the high-rise rooftop, but otherwise, there was practically no direct contact or confrontation between the demonstrators and the event participants.
Regardless, at one point, the goons decided to bring the demonstration to an end, and assaulted the demonstrators. One female demonstrator was pushed into the heavy traffic of the nearby city street by one of the plain-clothed goons. Luckily she was not hurt. The goons started chasing the demonstrators through nearby streets, trying to take away their megaphones.
The lone policeman on location responded to the situation by claiming that the area was declared "Security Zone", and that the demonstrators must leave. The demonstrators did not leave, though, and additional police van, which arrived following the assault, did not repeat, what was apparently a far-fetched fabrication.
The conduct of police, in particular the lack of police presence, leaving the arena for private goons to assault demonstrators, was most likely coordinated in advance by operatives of the tycoons with police. After all, Tshuva is reputed for hiring scores of high level former government officers, among them senior regulators and 2 former Israel Police chief commanders... [xi] And corruption of the top brass of Israel Police has become a critical issue in recent years... [xii]
___
Close to midnight, on the bus back to Tel-Aviv, two women were arguing. An orthodox Jewish woman said that the day's events showed that there was no place for the Pride parade in Jerusalem, since "there are a lot of very sensitive people in Jerusalem, who are really hurt by it." She concluded that such events should be permitted in Tel-Aviv only. The other young woman, still wearing her parade feather head-dress, asks her: "So sensitive that they must to go on a stabbing rampage?"
A man was wondering, how it came to be, that the stabber hadn't been shot to death by the Israel Police swat team on location. That has been the routine procedure relative to Palestinians in similar incidents in recent years, and the former internal security minister even condoned the practice, praising security, who chased and shot to death a Palestinian "The action of the Border Police officer who chased after the assailant and quickly killed him was correct and professional and that is how we want these incidents to end. " [xiii]
The day's events clearly show the failure of the Israeli government to maintain even the semblance of the rule of law and peace and welfare, regardless of the Israeli-Palestinian conflict, and how far-removed the situation in Jerusalem is from what was intended in its designation by international law as Corpus Separatum Jerusalem. [xiv]
LINKS

His work won appreciation in Israel and abroad: * Prof Uzzi Ornan - "All power to you! I hope that you see your tremendous efforts (more...)
Related Topic(s): Banking Fraud; Gay Pride Parade; Israel; Jerusalem, Add Tags
Add to My Group(s)
Go To Commenting
The views expressed herein are the sole responsibility of the author and do not necessarily reflect those of this website or its editors.