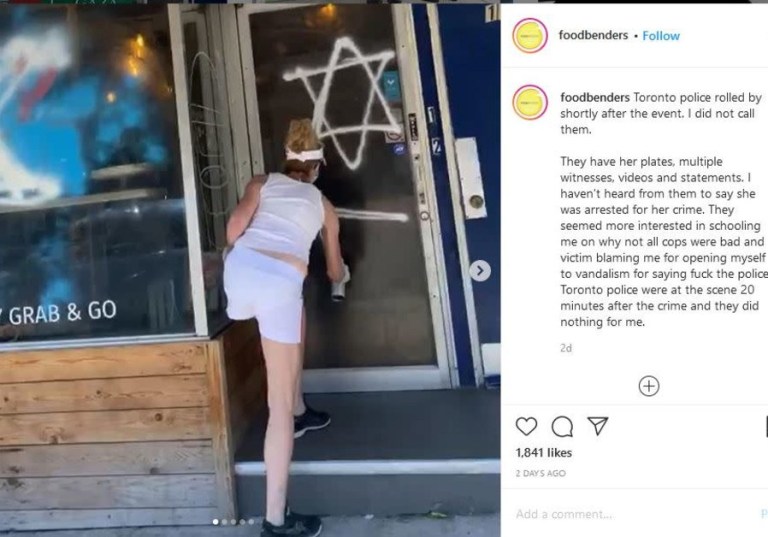 Why the official silence about Toronto's most powerful extreme right group? Is it because we live in a political culture where Palestinian lives don't matter?

Recently an individual with the Jewish Defence League (JDL) was photographed defacing a pro-Palestinian storefront with supremacist graffiti in broad daylight. Nothing has happened to them but the anti-racist victim has faced negative consequences.

On Sunday JDL thugs held a rally in front of Foodbenders, a sandwich shop that has "I Love Gaza" painted on its window. During their hate fest they scrubbed a Palestinian Lives Matter marking from the sidewalk and, similar to what Jewish supremacist settlers do to Palestinian homes in the occupied West Bank, someone painted the symbol on the Israeli flag onto the restaurant window. Alongside painting Stars of David on her storefront, Kimberly Hawkins has faced a bevy of online abuse. The Foodbenders owner has been called a "dirty Palestinian whore" and told "Palestine sucks I will burn your business down" and "I hope your family gets trapped inside the restaurant when it burns."

Hawkins has faced these attacks since an Instagram post of hers began circulating last week that stated, "Open Now - 8 PM for non-racist shoppers #Bloordale #Bloorstreet, #Toronto, #Open, #ftp #FreePalestine and #ZionistsNotWelcome." The police seem to have ignored the whole affair, perhaps because a few weeks earlier Foodbenders was embroiled in a controversy over a sign that read "No Justice, No Peace, F*ck the Police!"

The anti-Palestinian lobby pounced on the #ZionistsNotWelcome hashtag and demanded food delivery services boycott the store. Submitting to the pressure, Uber Eats, Ritual and DoorDash have cancelled their contract with the restaurant. (While "for non-racist shoppers" and "#ZionistsNotWelcome" are entirely legitimate statements, they are near impossible to enforce and it is questionable to block someone with racist views from purchasing a sandwich, as Hawkins immediately explained.)

The media has all but ignored the JDL's hate, as have the groups and individuals who claim to monitor the far right in Canada. The double standard is stark. When individuals have covered or painted over Black Lives Matter symbols the incidents have been widely reported and interpreted as racist. A couple in Contra Costa, California, were charged with a hate crime for painting over a BLM marking on the street. The Foodbender's case is far worse. The subjugation of Palestinians is crueller than the oppression of Black people in North America and the JDLers chose to deface the property with the symbol of Palestinians' oppressors.

Over the past decade JDL Toronto has built itself up by aggressively harassing Palestinian solidarity activists. Facebook has banned JDL Canada's account, classifying it a "dangerous organization". In 2011 the RCMP launched an investigation against a number of JDL members who were thought to be plotting to bomb Palestine House in Mississauga and in 2017 JDL Toronto members organized a mob that attacked protesters at the American Israel Public Affairs Committee (AIPAC) conference in Washington DC. In the worst incident, a 55-year-old Palestinian-American teacher was punched, kicked and hit with flagpoles. Bruised across his body, Kamal Nayfeh needed 18 stitches around his eye.

In November JDL supporters attacked peaceful pro-Palestinian activists protesting a presentation by Israeli military reservists at York University. One of the victims was reportedly knocked unconscious.

In the US the FBI labeled the JDL a "right-wing terrorist group" in 2001 after its members were convicted in a series of acts of terror, including the killing of the regional director of the American Arab Anti-discrimination Committee and a plot to assassinate a congressman. A member of the JDL's sister organization in Israel killed 29 Palestinian Muslim worshipers in the Cave of the Patriarchs Massacre 20 years ago.

The Centre for Israel and Jewish Affairs, B'nai B'rith, Ontario Premier Doug Ford and a slew of other politicians have all condemned Foodbenders. Simultaneously, they have ignored the JDL's racism, further emboldening Toronto's most powerful far right organization. It seems, for them, Palestinian lives do not matter.

Related Topic(s): Jewish Defense League, Add Tags
Add to My Group(s)
Go To Commenting
The views expressed herein are the sole responsibility of the author and do not necessarily reflect those of this website or its editors.