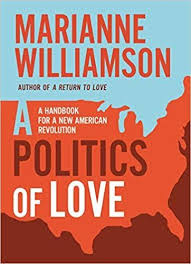 
The readings for this fifth Sunday of Easter centralize Jesus' New Commandment, to "Love one another as I have loved you." He also identifies the criterion for distinguishing his true followers from those who are not. He says, "This is how all will know that you are my disciples, if you have love for one another" again, "as I have loved you."

So, the question becomes how exactly did Jesus love those he interacted with? Was his love confined to the inter-personal sphere, or was it somehow political? And even if it was, is a politics of love practical? Or are we condemned to the political status quo based on fear and greed which our "Christian" culture has ironically convinced us is much more realistic than the love and compassion that Jesus seems to recommend?

The answer to all of those questions was captured in our liturgical readings several weeks ago in Jesus' first sermon as recorded by the evangelist called Luke. Jesus described his program in this way: "The Spirit of the Lord is on me, because he has anointed me to preach good news to the poor. He has sent me to proclaim deliverance to the captives and recovery of sight to the blind, to release the oppressed and to proclaim the year of the Lord's favor."

That final phrase "the year of the Lord's favor" is key to answering the questions I just posed. It's a reference to the Jubilee Year enshrined in Israel's ancient tradition. That tradition, if nothing else, was highly political. As economist Michael Hudson has reminded us recently in his And Forgive Them Their Debts, Jubilee referenced a political and economic practice common not only in Israel, but throughout the ancient Middle East. It had kings and emperors (usually on the occasion of their assuming power) periodically creating a clean slate for everyone, especially the poor. During Jubilee, debts were cancelled, land was redistributed, slaves were freed, and amnesty was extended to prisoners. Jubilee prioritized the needs of the poor, not the rich. Its unfolding in Jesus' public life involved non-violent resistance to temple authorities who had aligned themselves with Roman imperialism.

In other words, the unmistakable conclusion here is that if Christians are to love one another precisely in the way that Jesus loved them, their love must be unapologetically political and anti-imperial. They must practice a politics of love that prioritizes the needs of the poor, sick, indebted, imprisoned, and of those victimized by oppressors of all kinds.

In our own day, don't you think that at least gestures towards the spirit of the Green New Deal as opposed to continuation of the status quo? I do.

But, you might ask, is a politics of love practical? Or given the fallenness of the human race, isn't it more realistic to practice our familiar politics based on fear and greed to run the country like a business instead of like a family. Isn't it more sensible to appeal to self-interest, money and the bottom line?

In response, Marianne Williamson would ask, "Well, how's that working out for you?"

In case we've forgotten, (and please notice the dollar figures in what follows) by prioritizing the values of fear and greed, our "leaders" have :

And that's just the short list of the craziness of our culture's commitment to fear and greed rather than to a politics of love and compassion that prioritizes (as did Jesus) the needs of the poor, education, health care, debt forgiveness, and anti-imperialism.

Clearly, we can do better than that. Clearly, it's time to try something else.

But where, our culture asks, would the money come from to eliminate poverty and save the planet? Practically speaking, where would we find the money for a Green New Deal, for universal health care, for higher wages, for forgiving student loans, to remedy the epidemic of homelessness?

"Don't make me laugh" says Marianne Williamson in her Politics of Love. She writes:

"How would we pay for all that education and culture, health and safety" ask those who have no problem whatsoever paying for ill-begotten wars and tax cuts for the extremely wealthy. Such a question should be met by laughter from those who were never consulted as to how we would pay for a $2 trillion war in Iraq (which, among other things created ISIS) or a $2 trillion tax cut for the wealthiest among us (which, among other things, is already adding tour wealth inequality)."

No doubt, the Jesus of Jubilee would join in Williamson's ironic laughter. Where will we get the money?

Related Topic(s): Amazon; Compassion; Exxon; Jesus; Love One Another; Marianne Williamson; Politics Of Hate; Sunday, Add Tags
Add to My Group(s)
Go To Commenting
The views expressed herein are the sole responsibility of the author and do not necessarily reflect those of this website or its editors.