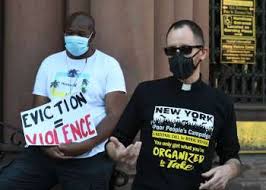 During the COVID-19 hiatus, I watched in its entirety Ken Burns' and Lynn Novick's PBS production "The Vietnam War." The series has ten episodes, each about an hour and a half long.

I bring it up because the viewing experience has relevance to this morning's Gospel reading which describes resistance to a landlord system similar to the one that provoked Vietnam's peasantry to take up arms.

Closer to home, the parable is also relevant to our current Corona Virus context, where unemployed renters will soon be required either to pay their rents or risk eviction. Their dilemma, like those of Jesus' audience 2000 years ago is whether to pay those rents or to join a general rent strike. Additionally, Jesus asks to what extent citizen violence might be justified as a strategic option as they resist paying rent.

Ironically, both the Burns and Novick film series and this morning's gospel obscure the questions just posed. The producers of "The Vietnam War" avoid the rent question altogether. As for Matthew the evangelist, he completely allegorizes Jesus' parable to similarly obscure its central question about absentee landlordism, rent strikes, and the role of violence in social change.

Let's begin with Burns and Novick. The official story they tell is that of a geopolitical struggle between China and Russia on the one hand and the U.S. and France on the other. So, the film's narrative is dominated by maps depicting huge swaths of geography (China and Russia) looming menacingly over Vietnam. The maps indicate that Vietnam along with the rest of "French" Indochina (including Laos and Cambodia) were threatened by monolithic communist takeover.

U.S. officials one after another describe their alarming "domino theory" contending that if Vietnam were "lost" to communism, so would Laos, Cambodia, Korea, Japan, the Philippines and the rest of Far East. It wouldn't be long before Ho Chi Minh's forces would be landing in Hawaii and then in California.

So, viewers are asked to believe that in the footage showing huge numbers of Vietnamese civilians (including the elderly, women and children) moving equipment, building bridges, and ferrying supplies, we are simply witnessing mindless agents of China and Russia. The Vietnamese were somehow persuaded to risk their lives (four million of them were killed in the conflict) to advance the totalitarian cause of Sino-Soviet world conquest.

As John Pilger and others have written, that simply doesn't stand to reason. For one thing, there was no monolithic alliance between Russia and China. Any semblance of that lay in ruins between the years 1960 and 1989.

That is, for the Vietnamese, what they call "The American War" (1960-75) could not have been fought on behalf of China or Russia. Rather, the conflict represented a struggle against colonial rule by French and American forces. It was also fought against a rent system that had peasants paying predatory tribute to absentee landlords. The latter were holed up in Saigon along with other beneficiaries of deteriorating colonial arrangements including its dysfunctional army, government officials, and participants in the supporting infrastructure.

Meanwhile, outside of Saigon, the peasants' revolutionary army (the Viet Cong) defended farmers against rent collection. They had the peasantry stop traveling to Saigon to pay their land fees. This, they said, would force representatives of the landlord class to venture out into territory controlled by the Viet Cong to collect their money or in-kind revenue. And there in the countryside they would be duly slaughtered.

In other words, patriotism and the peasants' immediate economic interest, not geo-political considerations, provided their main motivations for resistance to a colonial rental system that had long exploited them and caused their families to starve.

All of this has relevance to this morning's Gospel episode where Jesus tells a story that parallels the situation I've just described. Jesus and his audience too were living under an imperial system not unlike Vietnam's. The Romans controlled Palestine using tactics highly similar to those of the French and Americans in Indochina. The system's administrators, armies, police, and hangers-on were all holed up in Jerusalem protected by Roman legions.

Related Topic(s): Bible; Empire; Faith; God; Jesus; Parable; Resistance; Violence, Add Tags
Add to My Group(s)
Go To Commenting
The views expressed herein are the sole responsibility of the author and do not necessarily reflect those of this website or its editors.