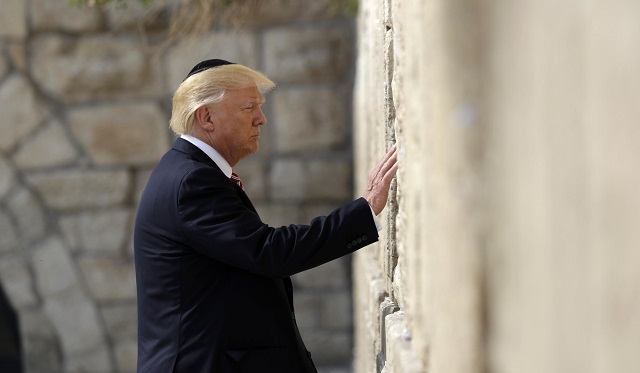 Israel has controlled East Jerusalem and the walled Old City since the 1967 war in which it also occupied the adjacent West Bank. It has effectively treated them as annexed territory ever since.

To consolidate its grip on the Old City, Israel has demolished homes and expelled Palestinian residents, empowered Jewish settlers, and imposed sweeping restrictions that make it virtually impossible for most Palestinians to pray at the Al-Aqsa Mosque, one of the holiest sites in Islam.

The final status of the Old City has been the subject of various proposals ever since the United Nations' 1947 partition plan, which proposed that it should fall under a special international regime, separate from the division of historic Palestine into Arab and Jewish states because of its shared importance to Muslims, Jews and Christians.

The Palestinians claim East Jerusalem, including the Old City, as the capital of a future state, while Israeli leaders have claimed Jerusalem as the state's "eternal capital" since 1949.

The Old City has huge historic, economic, religious and now national symbolism for both Palestinians and Israelis, particularly because of the Al-Aqsa compound, known as Haram al-Sharif to Muslims and Temple Mount to Jews. This is the most explosive issue in an already incendiary conflict.

But US President Donald Trump's decision to move the American embassy in Israel to Jerusalem in May 2018 appeared to pre-empt negotiations determining Jerusalem's status by implying US recognition of exclusive Israeli sovereignty over the city.

Washington's endorsement for such a move in any proposed peace plan including Trump's infamous "deal of the century" would not, however, mark the first time it has suggested that the Palestinian claim to the Old City should be brought to the negotiating table.

At talks in 2000 between Israeli Prime Minister Ehud Barak and Palestinian Authority President Yasser Arafat, hosted by US President Bill Clinton at his Camp David residence, US mediators proposed dividing sovereignty over the Old City.

According to the US proposal, Israel would take the Jewish and Armenian quarters, with the Palestinians getting the Muslim and Christian quarters.

Israel, however, demanded exclusive sovereignty over East Jerusalem, with the Palestinians having merely administrative authority over the Old City's Muslim and Christian Quarters.

Seven years later, at Annapolis, Israeli Prime Minister Ehud Olmert evaded the sovereignty issue by proposing instead a temporary international trusteeship administered by Israel, a Palestinian state, the US, Jordan and Saudi Arabia.

More than half a century of Israeli occupation has left its physical and political mark on the Old City. Along with East Jerusalem, the Old City is ruled over by a Jerusalem municipality run by Israeli officials.

After occupying the Old City in 1967, Israel quickly sought to secure control of the area immediately next to the Western Wall, demolishing dozens of homes in a Moroccan neighbourhood and expelling many hundreds of Palestinian inhabitants to create a large prayer plaza.

The Jewish Quarter was also re-established, though Israel converted many former homes into synagogues and seminaries for religious Jews.

Palestinians have been unnerved by the number of physical changes around Al-Aqsa and the neighbouring Muslim Quarter that appear to be designed to strengthen Israel's control not only over the Western Wall but the mosque compound too.