Sessions once claimed he never met with the Russians. Well, sorta, kinda, maybe. It depends... 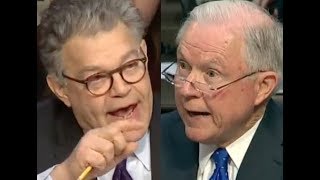 Jeff Sessions is a liar.

As President Trump's nominee to serve as attorney general of the United States, the veteran senator from Alabama and early supporter of Trump's presidential bid was asked by members of the Senate Judiciary Committee if he had met with Russian officials during the course of the 2016 campaign. He claimed that he had not -- in response to a written question from the senior Democrat on the Committee, Vermont's Patrick Leahy, and then under questioning from Minnesota Senator Al Franken.

Unfortunately, they worked. Sessions's nomination was endorsed by the Judiciary Committee, and he was quickly confirmed to serve as the nation's chief law-enforcement officer.

After Sessions took charge of the Department of Justice, it was revealed that he had met with the Russian ambassador to the United States during the course of the campaign; that he had, in fact, met more than once with the ambassador.

Sessions was outed as a liar. Because he had lied to senators during the course of the confirmation process, he was accused of perjuring himself. There were calls for his resignation.

The attorney general was in hot water. He dialed down the controversy by announcing that he would recuse himself from any involvement with investigations of Russian involvement with the Trump campaign and the 2016 election. Then it was revealed that Sessions had been intimately involved in the machinations that led to Trump's firing of FBI Director James Comey, whose oversight of investigations into the Russian matter had, by all accounts, unnerved the president.

Sessions had lied not just about his contacts with the Russians. He had lied about recusing himself.

At that point, in mid-May, Sessions should have been removed from his position. At the very least, he should have been called before the Judiciary Committee to answer for his deliberate and ongoing pattern of deception. But instead he remained at the helm of the Justice Department.

Related Topic(s): Accountability; Impeachment; Jeff Sessions; Lies; Senate Judiciary Committee, Add Tags
Add to My Group(s)
Go To Commenting
The views expressed herein are the sole responsibility of the author and do not necessarily reflect those of this website or its editors.