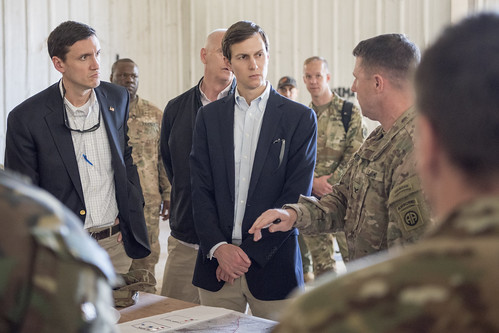 
First of all, isn't it amazing how much Jared Kushner resembles Mark Zuckerberg of Facebook?

Save him from what? There's the question. Gorelick is the one who can "figure out the line" between selling out her client or selling out national interests, this article concludes. Well, it's up to Robert Mueller, and now Andrew Weissmann, who quit his current job to join the investigation, to figure out what exactly he and his boss have done.

I have written about Kushner before, and the main thing to remember is that while this is no kid-- he's a 33-year-old real estate man worth a couple hundred million when he was so unexpectedly tapped to take over a portfolio of responsibility that an experienced hand would advise against, or accept and sub-delegate like crazy-- he's just way, way over his head.

One way to look at how Gorelick will "figure out the line" is what pleas will be made for him, since the facts that everybody knows for sure now-- that he suggested the Russian Ambassador collaborate with him in setting up a secure back-channel line to the Kremlin from secure Russian facilities, before Trump was even President-- would appear to convict him of treason.

She says that Kushner is willing to cooperate in all investigations. Donald Trump and Jeff Sessions and others have got to be shaking in their boots unless regardless of a portfolio of 4 or 5 important jobs (Trump, a novice at appointments to really complex and important positions that involve more than making money, threw him in over his head) Kushner was not actually in the inner loop, because he'll be a stool pigeon.

Know what? I look at this dude and I see something decent inside him that will be testifying not just to save himself a sentence longer than Chelsea Manning got, but because he KNOWS he's in far over his head and at this point, the right thing to do is to turn state's evidence, because I presume that he really is nothing more than a catspaw for Trump.

Related Topic(s): Jamie Gorelick; Jared Kushner; Russia Investigation; Superlawyers, Add Tags
Add to My Group(s)
Go To Commenting
The views expressed herein are the sole responsibility of the author and do not necessarily reflect those of this website or its editors.