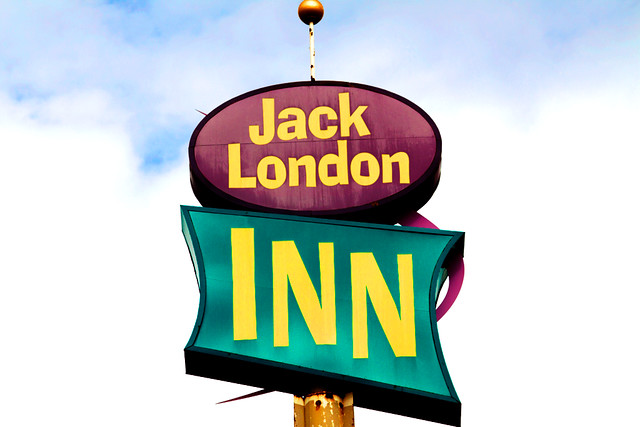 As writer or thinker, Jack London can't touch George Orwell, but he's nearly the Brit's equal when it comes to describing society's bottom. To both, being a writer is as much a physical as an intellectual endeavor. Wading into everything, they braved all discomforts and dangers. This attitude has become very rare, and not just among writers. Trapped in intensely mediated lives, we all think we know more as we experience less and less.

At age 14, London worked in a salmon cannery. At 16, he was an oyster pirate. At 17, he was a sailor on a sealing schooner that reached Japan. At 18, London crossed the country as a hobo and, near Buffalo, was jailed for 30 days for vagrancy. At 21, he prospected for gold in the Klondike. London was also a newsboy, longshoreman, roustabout, window washer, jute mill grunt, carpet cleaner and electrician, so he had many incidents, mishaps and ordeals to draw from, and countless characters to portray.

London's The Road chronicles his hobo and prison misadventure. Condemned to hard labor, the teenager nearly starved, "While we got plenty of water, we did not get enough of the bread. A ration of bread was about the size of one's two fists, and three rations a day were given to each prisoner. There was one good thing, I must say, about the waterit was hot. In the morning it was called 'coffee,' at noon it was dignified as 'soup,' and at night it masqueraded as 'tea.' But it was the same old water all the time."

London quickly worked his way up the clink's hierarchy, to become one of 13 enforcers for the guards. This experience alone should have taught him that in all situations, not just dire ones, each man will prioritize his own interest and survival, and that there's no solidarity among the "downtrodden" or whatever. Orwell's Animal Farm is a parable about this. Since man is an egoist, power lust lurks everywhere.

During the Russo-Japanese War a decade later, London would approvingly quote a letter from Japanese socialists to their Russian comrades, but this pacific gesture was nothing compared to the nationalistic fervor engulfing both countries. Like racism, nationalism is but self love. Though clearly madness if overblown, it's unextinguishable.

Jailed, London the future socialist stood by as his gang disciplined a naïf, "I remember a handsome young mulatto of about twenty who got the insane idea into his head that he should stand for his rights. And he did have the right of it, too; but that didn't help him any. He lived on the topmost gallery. Eight hall-men took the conceit out of him in just about a minute and a halffor that was the length of time required to travel along his gallery to the end and down five flights of steel stairs. He travelled the whole distance on every portion of his anatomy except his feet, and the eight hall-men were not idle. The mulatto struck the pavement where I was standing watching it all. He regained his feet and stood upright for a moment. In that moment he threw his arms wide apart and omitted an awful scream of terror and pain and heartbreak. At the same instant, as in a transformation scene, the shreds of his stout prison clothes fell from him, leaving him wholly naked and streaming blood from every portion of the surface of his body. Then he collapsed in a heap, unconscious. He had learned his lesson, and every convict within those walls who heard him scream had learned a lesson. So had I learned mine. It is not a nice thing to see a man's heart broken in a minute and a half."

Jailed, you immediately recover your racial consciousness, but London apparently missed this. In any case, a lesser writer or man wouldn't confess to such complicity with power. Elsewhere, London admits to much hustling and lying, and even claims these practices made him a writer, "I have often thought that to this training of my tramp days is due much of my success as a story-writer. In order to get the food whereby I lived, I was compelled to tell tales that rang true [...] Also, I quite believe it was my tramp-apprenticeship that made a realist out of me. Realism constitutes the only goods one can exchange at the kitchen door for grub."

Informed by hard-earned, bitter experience, London's accounts resonate and convince, even when outlandish, for they are essentially true about the human condition.

London on a fellow prisoner, "He was a huge, illiterate brute, an ex-Chesapeake-Bay-oyster-pirate, an 'ex-con' who had done five years in Sing Sing, and a general all-around stupidly carnivorous beast. He used to trap sparrows that flew into our hall through the open bars. When he made a capture, he hurried away with it into his cell, where I have seen him crunching bones and spitting out feathers as he bolted it raw."

Though London often uses "beast" or "beastly" to describe how humans are treated, this fellow appears to be congenitally bestial, with his all-around stupidity. As for the other prisoners, "Our hall was a common stews, filled with the ruck and the filth, the scum and dregs, of societyhereditary inefficients, degenerates, wrecks, lunatics, addled intelligences, epileptics, monsters, weaklings, in short, a very nightmare of humanity." Though many are wrecked, others are born deficient, addled or weak, but in our retarded days, morons must be smart in other ways, and raging monsters are merely oppressed into mayhem or murder.

But of course, society does oppress, then and now. Remember that an 18-year-old London was sentenced to 30 days of hard labor for merely being in a strange city without a hotel reservation. Another inmate was doing 60 for eating from a trash can, "He had strayed out to the circus ground, and, being hungry, had made his way to the barrel that contained the refuse from the table of the circus people. 'And it was good bread,' he often assured me; 'and the meat was out of sight.' A policeman had seen him and arrested him, and there he was." Well, at least Americans are no longer locked up for dumpster diving, so there's progress for you, but then many must still feed from the garbage, with that number rapidly rising.

Though London was a worldwide celebrity at his death in 1916, his fame faded so fast that Orwell could comment in 1944, "Jack London is one of those border-line writers whose works might be forgotten altogether unless somebody takes the trouble to revive them."

London's most enduring book may turn out to be The People of the Abyss, his 1903 investigation into the abjectly impoverished of London's East End.

Dressed accordingly, London joined its homeless to see how they survived. With a 58-year-old carter and a 65-year-old carpenter, London wandered the cold streets, "From the slimy, spittle-drenched, sidewalk, they were picking up bits of orange peel, apple skin, and grape stems, and, they were eating them. The pits of greengage plums they cracked between their teeth for the kernels inside. They picked up stray bits of bread the size of peas, apple cores so black and dirty one would not take them to be apple cores, and these things these two men took into their mouths, and chewed them, and swallowed them; and this, between six and seven o'clock in the evening of August 20, year of our Lord 1902, in the heart of the greatest, wealthiest, and most powerful empire the world has ever seen."

Having mingled with many homeless in cities across America, I can attest that the food situation is not as bad in that unraveling empire, but the squalor is just as appalling, if not worse. A Wall Street Journal headline, "California's Biggest Cities Confront a 'Defecation Crisis'." There's no need to import public sh*tting from shitholes, since there's already plenty of it, homegrown and well-fertilized with smirkingly cynical policies.

Related Topic(s): George Orwell; Jack London; Socialism, Add Tags
Add to My Group(s)
Go To Commenting
The views expressed herein are the sole responsibility of the author and do not necessarily reflect those of this website or its editors.