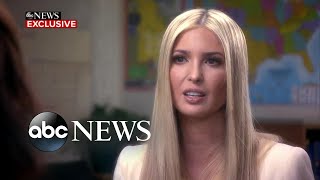 There's an important thing to remember about Ivanka Trump: she is a bad and selfish person. The proverbial apple hasn't even left the tree, let alone fallen from it. Ivanka has spent most of her time as the first daughter getting that money!

The most recent example of the Trump-branded incompetence and corruption are the reports that Ivanka used her personal email account to conduct "government" work. The bad press isn't good for Ivanka's brand, so she wants to try and change the subject. ABC News' Deborah Roberts did an interview with Ivanka as part of a new public relations campaign she has embarked on to get high speed internet access to rural areas of the United States.

Like all PR campaigns, the headline is the best part. The problem that Ivanka has is that while she enjoys getting special treatment, pulling in millions from daddy's business while promoting herself as some built-from-the-ground-up fierce independent woman, anytime she steps out to promote herself the media always begins asking her about her dad and the terrible things he's doing and saying. This really cramps Ivanka's style because while she is a special adviser to the president and promotes herself to foreign businesses as such, she really doesn't care about anything not named Ivanka Trump.

After doing the requisite profile, showing Ivanka and Apple CEO Tim Cook going into heartland schools to tell people about the wonders of the internets, Ivanka sat down with Roberts. One of the sections of the interview included the border crisis. Roberts specifically asked about her father authorizing and then saying he authorized the use of lethal force at the border.

Roberts: Your father authorized lethal force if necessary. Does that concern you?

Ivanka: I don't believe that that's what he said; but his primary role as commander in chief is obviously to protect the nation's borders. He has to protect our nation's security, but lethal force in this case would -- that is not, I think, something that anyone is talking about.

Roberts then shows Ivanka a clip of her father -- on Thanksgiving -- saying exactly that. Ivanka takes a breath and then does what a corrupt person does: she pretends she knows what she's talking about.

Some people call that "lying."

Related Topic(s): Border Security; Donald Trump; Father; Immigrants; Ivanka Trump; Video, Add Tags
Add to My Group(s)
Go To Commenting
The views expressed herein are the sole responsibility of the author and do not necessarily reflect those of this website or its editors.