As we have reported here on OEN, Italy has been in the forefront of efforts to save migrants from Africa from drowning in the Mediterranean, eventaully prompting fellow EU members to draw up a common rescue plan. But the demand by its foreign policy head, Federica Mogherini that counries share the burden of welcoming them has been rejected by most member states.[tag] 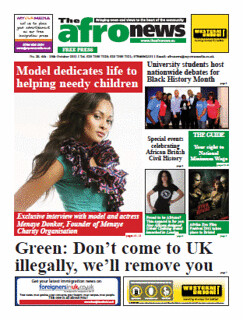 AfroNews-Cover-4-Oct2011
(Image by foreignersinuk)   Details   DMCA
Recently, migrants have been camping under an elevated subway line in Paris, having been prevented from doing so at the head of the channel train to Great Britain, and now they are also camping in Rome, as border guards in Ventimiglia prevent them from crossing to France. Confronted with this most un-EU-like lack of solidarity, the Italian Prime Minister Matteo Renzi has issued a dare to his fellow heads of government: if you do not do your duty, we will grant these refugees resident status, which will enable them to go anywhere in the European Union without being stopped.
This is not some passing crisis, but a situation destined to build over time to proportions that only the far-right has so far identified. Back in February, I laid out its parameters: http://www.opednews.com/articles/In-Europe-the-Arithmetic-by-Deena-Stryker-Africans_Arab_Christianity_European-Union-150228-158.html

Related Topic(s): Far-right; France; Refugees; Solidarity; South; Ukraine, Add Tags
Add to My Group(s)
Go To Commenting
The views expressed herein are the sole responsibility of the author and do not necessarily reflect those of this website or its editors.