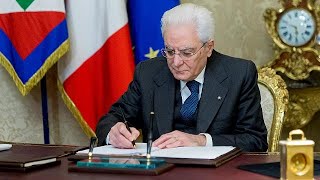 Italian elections are always complex affairs, but the upcoming Mar. 4 vote is one of the most bewildering in several decades: the right is resurgent, the left embattled, and the issue drawing the greatest fire and fury has little to do with the economic malaise that has gripped the country since the great economic crash of 2008.

These days, predicting election outcomes in Europe is a fool's game because the electorate is so volatile, a state one hardly can blame it for given the beating it has taken from the almost decade-long policies of the European Union (EU). The organization's rigid economic strictures for dealing with the debts incurred from the 2008 crisis -- social service cutbacks, tax hikes, massive layoffs, and privatization -- have sharply increased economic inequality throughout the continent and created a "lost generation" of young people: poorly educated, unemployed, and locked into low paying part-time jobs (if they manage to find one).

There has been a surge of right-wing parties throughout the EU, but the analysis that voters are turning right is too simplistic. Voters in Germany did put the Nazi Alternative for Germany in the Bundestag, but mostly because they were fed up with the "stay-the-course" mainstream parties that offered them little more than austerity and more austerity. Dutch voters demolished their social democratic Labor Party, not because it was left, but because it was timidly centrist. Much the same was true for the French Socialist Party.

When center-left and left parties challenge austerity, voters reward them, as they did in Britain and Portugal. It is not so much that the compass is swinging right, but rather that it is spinning.

The Italian elections are a case in point. Italy has one of the highest debt ratio in the EU, distressing unemployment figures -- 11.4 percent nationally, and up to 36 percent among the young -- a troubled banking sector, and a deteriorating infrastructure. Garbage -- quite literally -- is overwhelming Rome. But instead of seeking solutions, most parties are talking about African and Middle East immigrants, a focus that is revealing an ugly side of the peninsula.

Hate crimes have risen 10-fold since 2012, and 20 percent of Italians admit to being anti-Semitic. The anti-fascist organization Infoasntifa Ecn has recorded more than 140 neo-fascist attacks since 2014.

Italy currently plays host to some 620,000 immigrants, and since France, Austria and Switzerland tightened their borders, Italy is stuck with them. The EU has been little help. While Brussels was willing to shell out over $6 billion to Turkey to deal with the flood of immigrants generated by the wars in Syria and Yemen, Italy has been left to deal with the problem by itself.

Conn M. Hallinan is a columnist for Foreign Policy In Focus, "A Think Tank Without Walls, and an independent journalist. He holds a PhD in Anthropology from the University of California, Berkeley. He oversaw the (more...)
Related Topic(s): Elections; European Union; Immigration; Italian, Add Tags
Add to My Group(s)
Go To Commenting
The views expressed herein are the sole responsibility of the author and do not necessarily reflect those of this website or its editors.