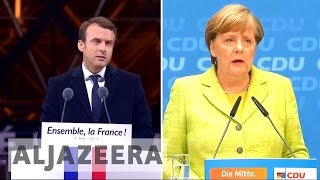 It's fairly simple really. As long as the other European signatories to the 2015 JCPOA nuclear agreement with Iran, namely France, the UK and Germany won't uphold their end of the bargain and defy the US unilateral withdrawal from the nuclear deal last year then Iran will not uphold to the agreement's limitations, particularly its uranium enrichment. To that end Iran has begun enriching uranium to 5% injecting uranium gas into centrifuges which is beyond what it agreed to in the 2015 nuclear deal.

As long as the European countries continue to foot drag on their commitment and allow the US to re-introduce unilateral sanctions against Iran, that were dropped as part of the nuclear agreement, the Iranian's recognize they are not bound by its limiting terms and will do what it considers to be in its own interests.

Significantly, Iran has also made it clear to the Europeans it would return to the deals 2015 limitations on its uranium enrichment only when they uphold their end of the deal.

Every incident that has occurred since Trump's unilateral withdrawal i.e. oil tankers sabotaged off the coast of the UAE, oil tanker hijacked off Gibraltar, oil tankers hit by a missile off coast of Oman, Iran seizure of a British oil tanker in Persian Gulf, a US drone shot down over Iranian territory should all be seen as connected to the US withdrawal to the nuclear deal with Iran.

Iran doesn't want war with the US. But Iran has made it clear if its territory is attacked it will defend itself and retaliate against its attackers.

Israeli Prime Minister Benjamin Netanyahu shouldn't be discounted regarding US actions toward Iran. He views Iran as Israel's primary enemy. He would like nothing better than a US initiated war with Iran. Netanyahu is paranoid of Iran's role in Syria supporting President Bashar Assad as well as Iran backing Hezbollah in Syria and Lebanon.

It seems only Russian President Vladimir Putin can occasionally keep a lid on Netanyahu's worst instincts over Syria. Yet Putin couldn't prevent Israel formally announcing it has annexed the Golan Heights it seized from Syria after the 1967 war.

With Iran's latest increased uranium enrichment activity a few Republican crazies in Congress have weighed in with Lindsey Graham in the Senate and Liz Cheney in the House calling for increased sanctions on Iran.

Meanwhile Senator Bernie Sanders has voiced his "concern" over Iran's latest uranium enrichment ploy but he wants the US return to its obligations under the agreement.

The real concern here is US recklessness needs to be quelled before some incident, accident, false flag operation against Iran happens, it retaliates, all hell breaks loose bringing an economic catastrophe to the world.

France, Germany even the UK need to step up to enforce their end of the deal with Iran. Them blaming Iran is just being cowardly toward the US bully.

They are independent sovereign nations. It's time they act like it break free of the US yoke around their necks since the end of WWII.

Retired. The author of "DECEIT AND EXCESS IN AMERICA, HOW THE MONEYED INTERESTS HAVE STOLEN AMERICA AND HOW WE CAN GET IT BACK", Authorhouse, 2009
Related Topic(s): Agreement; Iran; Jcpoa; Nuclear, Add Tags
Add to My Group(s)
Go To Commenting
The views expressed herein are the sole responsibility of the author and do not necessarily reflect those of this website or its editors.