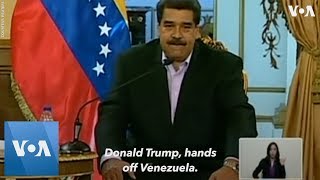 It's astounding how blatant US machinations are regarding Venezuela.

No need to be clandestine about what the objective is, overthrow the legitimately elected government of President Nicolas Maduro, recognize an almost unknown national assembly leader Juan Guaido as the new interim president, introduce new sanctions against the state owned oil company PDVSA, freeze $1.2 billion in Venezuelan gold reserves held in London, have US flaks in the EU order new presidential elections within 8 days, say everything is on the table which is code for a military attack and then have national security advisor John Bolton have his note pad with the words "5,000 troops to Columbia" be clearly observed by nearby cameras.

There's an obvious coup taking place being fomented by the US and its lackeys clearly interfering in the internal affairs of a sovereign country. It's an internationally recognized crime but the US has disregarded international law with impunity for decades, figuratively sticking its finger in the eye of the international community whenever it so desires.

A little history on that score. In 1953 the CIA acted behind the scenes to overthrow the legitimately elected government of Prime Minister Muhammad Mossadegh in Iran. The Bay of Pigs fiasco against Castro's Cuba in 1961 was a CIA perpetrated clandestine operation. Even the repeated attempted assassinations of Castro were clandestine. The 1964 Gulf of Tonkin false flag incidents in waters off N. Vietnam were secret CIA operations. So were the 1970's Iran/Contra deals supporting the Contra rebels against the Sandinista government in Nicaragua. The CIA fomented the coup of legitimately elected Salvadore Allende in Chile in 1973. The 80's saw the US secretly funding Osama bin laden's Mujahedeen in Afghanistan against the Soviets. We also secretly backed Iraq's Saddam Hussein in his war against Iran. Then in 1991 the US turned on its former ally for his invasion of Kuwait in the US perpetrated Gulf War because we needed to teach the dictator a lesson-even though we had secretly told Saddam through our Ambassador to Iraq April Glaspie the US wouldn't interfere if he invaded Kuwait as they were horizontally drilling into Iraqi oil fields and stealing their oil.

Then came 9/11 and everything changed. Little need for acting clandestinely. Invade Afghanistan over Bin Laden's alleged role in perpetrating the horror of that fateful day. Then two years later openly defy nuclear inspectors in Iraq who found no WMD, then invade and occupy the country creating an immediate insurgency by disbanding the 400,000 mostly Sunni Iraqi army with many of the officers later becoming Islamic State leaders in Iraq and in our proxy war in Syria.

Though it can be said the US acted clandestinely in the February 2014 coup of Ukraine President Viktor Yanukovych, there is nothing secret about what "official" Washington is doing in Venezuela. Even Bolton said, "It will make a big difference to the United States economically if we could have American oil companies really invest in and produce the oil capabilities in Venezuela". That's Bolton dissembling on the US taking over Venezuela's oil with the largest reserves in the world.

That's really what this is all about. The US supporting a stooge like Guaido and saying they want to bring back democracy for the Venezuelan people are ruses masquerading as "legitimate" reasons to be engaged in Venezuelan internal affairs.

Of late Maduro posted on his Twitter account a direct appeal to the American people saying, "People from the USA, I ask for your support in order to reject the interference of Donald Trump's administration which intends to turn my homeland into a 'Vietnam war' in Latin America. Don't allow it. If the US intends to invade us, they will have a Vietnam worse than they can imagine".

Well the American people have been flooded with propaganda by Washington politicos on the right and left and a corporate MSM that is nothing more than a complicit enabler to its government's machinations. Whether the American people can cut through the fog of propaganda they've been subjected to is questionable at best and sadly from here highly unlikely.

Russia and China and to a lesser degree Turkey, Iran, Bolivia, Nicaragua, Cuba, Mexico support of the Maduro government are the best chance to avert the destabilization and destruction of Venezuela-particularly by US lackey's in neighboring Brazil and Columbia.

Venezuela could be the last stand where US usurpations overthrowing legitimately elected governments that refuse to fall under US hegemony finally come to an end. That could be wishful thinking. Venezuela and Maduro is not Syria and Assad where Russia was officially invited to intervene and it along with Hezbollah, the Iranians and the Syrian Arab Army turned the tide, saved the legitimately elected government of Bashar Assad and prevented Syria from becoming a US supported terrorist haven.

What Russia can actually do in Venezuela is more problematic even though Putin has warned of "catastrophic" consequences if the US sends military assistance to Guaido. It's hard to see Russia intervening militarily in Venezuela even if they were invited by Maduro.

Retired. The author of "DECEIT AND EXCESS IN AMERICA, HOW THE MONEYED INTERESTS HAVE STOLEN AMERICA AND HOW WE CAN GET IT BACK", Authorhouse, 2009
Related Topic(s): America; Destabilization; Government; Sanctions; Venezuelan Coup, Add Tags
Add to My Group(s)
Go To Commenting
The views expressed herein are the sole responsibility of the author and do not necessarily reflect those of this website or its editors.