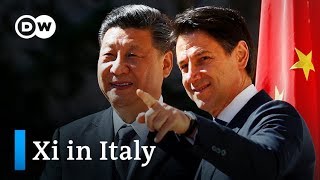 In case you missed it with all the hoopla generated over the Mueller investigation dominating the corporate MSM "news", in a major move to assert its sovereignty Italy over the weekend inked a deal with visiting Chinese President Xi joining China's BRI, Belt and Road Initiative.

To be sure the US administration was none too happy with White House National Security spokesman Garrett Marquis saying, " We are skeptical that the Italian government's endorsement will have any sustained benefits to the Italian people and it may end up harming Italy's global reputation in the long run". Earlier in the month he tweeted, "No need for Italian government to lend legitimacy to China's infrastructure vanity project". Hmm, the US is not a part of the BRI so condemn it as not legitimate and nothing more than Chinese vanity. It's almost laughable.

As we know the US under Trump is locked in a tariff war with China and China's BRI is a major economic and development challenge to US global hegemony. So when a major economic power like Italy strikes a deal that it believes will generate greater economic development for the country and benefit the Italian people it is saying unequivocally Italy will decide what is beneficial to its country and its people, not the US or even other countries in the EU.

German Chancellor Angela Merkel was tempered in her response noting it would be better for the EU to negotiate as a single bloc with Beijing.

Yet Germany is taking its own independent course partnering with Russia to build the Nord Stream 2 natural gas pipeline under the Baltic Sea. Trump's none too pleased with his administration threatening secondary sanctions against the corporate interests financing the project. To which Merkel has said the US has no business interfering with a strictly European project with Russia.

Also dismiss "official" Washington's objections of Germany partnering with Russia and coming under greater influence of Russia's Vladimir Putin. Germany was receiving natural gas from the USSR during the cold war and the US never objected believing then West Germany was somehow coming under the dominating influence of some Soviet premier and the US must put an end to Germany receiving Soviet natural gas.

Today the simple reason behind the Washington's objection to Nord Stream 2 is it wants Europe to buy the higher priced US natural gas. Not exactly beneficial to the European people.

But what is really happening with these independent challenges by Italy and Germany? They reveal fissures in the US-EU strategic alliance with countries slowly shedding US shackles over them.

It's a multi-polar world out there yet the US still clings to the illusion it's a single polar world and it can dictate to everyone else threatening countries and businesses with sanctions or secondary sanctions if they do business with say Iran, a country under severe US oil sanctions. Yet countries are defying US diktat exploring new financial mechanisms to continue trading with Iran and buy its oil despite the US sanctions. US sanctions or threats of sanctions are desperate measures.

The world is catching on to these US ploys with more and more countries taking independent steps defying potential US threats of sanctions against them. Italy is just the latest.

Retired. The author of "DECEIT AND EXCESS IN AMERICA, HOW THE MONEYED INTERESTS HAVE STOLEN AMERICA AND HOW WE CAN GET IT BACK", Authorhouse, 2009
Related Topic(s): Belt And Road Initiative; Initiative; Italian, Add Tags
Add to My Group(s)
Go To Commenting
The views expressed herein are the sole responsibility of the author and do not necessarily reflect those of this website or its editors.