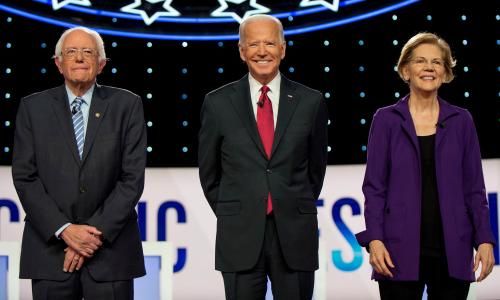 The Democratic nominee in 2020 will be Joe Biden, Elizabeth Warren or Bernie Sanders. Everyone else is irrelevant.

Don't get me wrong. The entire field is impressive. Every candidate in last week's debate would make a far better president than the current inhabitant of the Oval Office.

But let's get real. Biden, Warren, and Sanders each continue to garner around 20% in the polls while all others are in the single-digit doldrums. The front-runners also have the money and the organization.

Related Topic(s): 2020 Elections; Joe Biden; Sanders-Bernard; Trump Attacks Democrats; Warren-Elizabeth, Add Tags
Add to My Group(s)
Go To Commenting
The views expressed herein are the sole responsibility of the author and do not necessarily reflect those of this website or its editors.