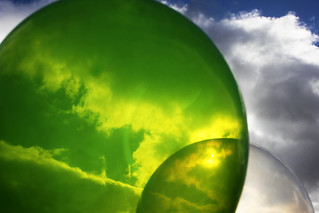 An interesting question is, what are you waiting for?

Global warming is the biggest problem we've ever faced as a civilization -- certainly you want to act to slow it down, but perhaps you've been waiting for just the right moment.

That would be this moment -- the moment when 135 children have drowned in Thailand trying to cool off from the worst heatwave on record there. The moment when, in a matter of months, we've recorded the highest wind speeds ever measured in the western and southern hemispheres.

For years people have patiently and gently tried to nudge us onto a new path for dealing with our climate and energy troubles--we've had international conferences and countless symposia and lots and lots and lots of websites. And it's sort of worked--the world met in Paris last December and announced it would like to hold temperature increases to 1.5C or less. Celebration ensued. But what also ensued was February, when the planet's temperature first broke through that 1.5C barrier. And as people looked past the rhetoric, they saw that the promises made in Paris would add up to a world 3.5C warmer--an impossible world. The world we're starting to see take shape around us.

So there's a need to push harder. A need, as it were, to break free from some of the dogma that's surrounded this issue for a very long time. Yes, we need to have "everyone work together." Yes, we need a "multi-faceted, global effort." But you know what we really need? We need to keep oil and gas and coal in the ground, keep it from being burned and adding its freight of carbon to the global total.

Which is why, from one end of the planet to the other, people are taking greater risks this month. In one of the biggest coordinated civil disobedience actions the world has ever seen, frontline communities and climate scientists and indigenous people and faith leaders and just plain people who actually give a damn will be sitting down and sitting in and standing pat -- blocking, at least for a few hours, those places where the coal and oil and gas currently reside, in the hopes of helping keep them there.

Bill McKibben is the author of a dozen books, including The End of Nature and Deep Economy: The Wealth of Communities and the Durable Future. A former staff writer for The New Yorker, he writes regularly for Harper's, The Atlantic Monthly, and The (more...)
Related Topic(s): Activism; Climate; International, Add Tags
Add to My Group(s)
Go To Commenting
The views expressed herein are the sole responsibility of the author and do not necessarily reflect those of this website or its editors.