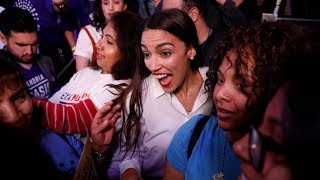 A record number of women are heading to Congress after the US Midterms
(Image by YouTube, Channel: The Telegraph)   Details   DMCA

The election of a record number of women to Congress is significant in that Congresswomen are more likely to focus on socio-economic and gender-based issues that have largely been either ignored or resisted by a predominantly male Congress. The fact that nearly 25% of the House and Senate are now women means their voices can no longer be ignored, as they will have the power to block any legislation that will be inconsistent with their set of beliefs and priorities, within their own party. As such, women legislators can be extraordinarily effective because they were elected largely on the premise they would be focused on socio-economic issues of great concern to their constituents.

Women are more attuned to these issues for several reasons, including social conditioning and culture, where the expectation is on women to be primary caregivers. Additionally, women's role as part of a marginalized community makes them more empathetic to injustices, as women have a long history of being treated as second-class citizens.

There are numerous significant issues that sadly have not been effectively addressed by either the Democrats or Republicans over the past 10 years, which Congresswomen can now focus on. Although some such legislative initiatives may take place under a Democratically-controlled House, the Republican Senate is unlikely to adopt them. Nevertheless, the mere fact that these issues are debated in the House will engender important public support, which would aid significantly the Democrats in the run-up to the 2020 elections.

Child poverty: Legislation should be introduced by Congresswomen to deal with the growing travesty of 6.5 million children living in extreme poverty throughout the United States. Many of these children go to sleep hungry, live in squalor, and are unable to attend school on a regular basis. It is hard to fathom that this terrible phenomenon exists in the United States, one of the richest countries in the world.

Appropriating the necessary funding to tackle this issue over a period of three-five years is critical, not only for the children themselves, but for America as a country. Indeed, the difference between a poor and uneducated child versus a better fed and educated one has serious social and political repercussions that we cannot afford to ignore.

Equal pay for equal work: Congresswomen should introduce legislation to close the gender pay gap in the workplace. There is absolutely no reason why women who perform equal tasks to any man should receive a considerably lower salary or be passed over for promotions solely based on gender.

This issue should be debated to create public awareness, and legislative guidelines should be provided that promote equality and forge an easier legal path for aggrieved women in this area to rectify the discrimination.

Reproductive rights: Another issue of great concern to women is the absurdity that a predominantly male Congress presumes it has the right to determine what women can or cannot do with their bodies. A woman's decision to bear children should be her and only her prerogative with no outside interference, other than within the family. Prohibiting, cutting funding, and preventing access to Planned Parenthood must totally be outside the domain of federal legislation.

For the Republicans, preventing women from determining their own reproductive future because they seek the political support of evangelicals and other conservative groups borders insanity. Congresswomen must bring this issue to the fore now, specifically because the current Republican Senate's disgraceful rejection of any reform in this regard can now be challenged by House Democrats. Congresswomen must fight to ensure that Roe v. Wade is never tampered with.

Minimum wage: Congresswomen should fight to raise the minimum wage. It is simply incomprehensible that since 2009, the federal minimum wage (which was "designed to create a minimum standard of living to protect the health and well-being of employees") has not been raised from $7.25. The annual sum of this for a full-time employee would roughly be $11-12,000 after taxes, which is below the poverty threshold. To suggest that a family of four, with both parents working, can survive on this amount is unfathomable.

The Republican Party, which passed major tax cuts that provided billions to the rich, pretends that those benefits will trickle down to the poor, who have basically received no benefit whatsoever, and yet those legislators still resist raising the minimum wage. Congresswomen ought to push for legislation to increase the minimum wage to $15, which will allow the poorest to have three meals a day, rather than go to sleep hungry.

Gun control: Congresswomen should push for gun control laws to end the epidemic of mass shootings, homicide, and suicide by firearms, which kill on average 39,000 people per year. In the United States, it's estimated there is in excess of 390 million firearms, more than one for every American. It's time to wake up to this miserable reality. New Congresswomen, such as Lucy McBath of Georgia's 6th District, who ran on a gun reform platform, can make this a top priority.

The answer to gun violence is certainly not arming teachers or placing armed guards in every private or public institution. As it is, the current level of security feels like a military camp everywhere one goes. What needs to be done is to make background checks required, support gun buyback programs, restrict private sales of weapons, reinstate the federal assault weapons ban, remove restrictions on suing gun manufacturers, pass campaign finance reform to limit campaign contributions from lobbyists including the NRA, and raise the age to purchase a weapon, to 21 at a minimum, but ideally to 25 years old.

Related Topic(s): Congress; Firearms; Poverty; Reform; Take Back The Democratic Party And America; Women, Add Tags
Add to My Group(s)
Go To Commenting
The views expressed herein are the sole responsibility of the author and do not necessarily reflect those of this website or its editors.