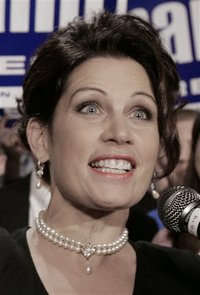 Hear that odd sound, like oars being inserted into oar-locks in a small row-boat? That's Representative Michelle Bachmann (R-Lunatic) leaving the U.S. as promised now that President Obama has (gasp!) announced what amounts to a do-or-die ultimatum for the struggling automobile industry. In addition to laying out strict standards that the car makers must meet to get more government aid (taxpayer money), he ordered the forced retirement of CEO Rick Wagoner. More money, he said, now depends on how the companies are managed. (Oh, my god! Not that! Not efficient, productive management!)


On hearing that, Bachmann screamed, "Marxism! Marxism! It's the end of the world!" and frantically started loading her 14-foot dory. Destination? A little island off the coast of Croatia where a god-fearing woman can live free of tyranny and keep her chastity intact. As she loaded her bibles and make-up she moaned,

Meanwhile, the drug-addled leader of the Republican (Limbot)  Party -- Rush "Def By Temptation" Limbaugh -- instructed his confused and jibbering listeners to, first, stop emailing him, goddamit, with pleas for deliverance, and second, to quick! hide your unemployment checks because the Army of Obama is coming and they are "going to take everything you own! That's how Marxism works!!!!  I told you this day was coming! I told you! And, now, it's HERE!!!! Hide! Hide, goddamit! Here comes the Army of Obama!!!!"

In his prepared remarks today, President Obama made it murderously clear to Republicans (Limbots) that we are all doomed when he slyly said: "The pain being felt in places that rely on our auto industry is not the fault of our workers; they labor tirelessly, and desperately want to see their companies succeed."  (See?! Marxism!!) "It's not the fault of all the families and communities that supported manufacturing plants throughout the generations. Rather, it's a failure of leadership -- from Washington to Detroit -- that led our auto companies to this point.

"Year after year, decade after decade, we've seen problems papered over and tough choices kicked down the road, even as foreign competitors outpaced us. Well, we've reached the end of that road." (Aieeeeee!!!! Doomed! We're doomed! Marxism!!)  "And we, as a nation, cannot afford to shirk responsibility any longer. Now is the time to confront our problems head-on and do what's necessary to solve them." (Help us, Rush!! Help us!!! What's wrong?! Can't you hear us? What are you, deaf?!)

"We cannot, and must not, and we will not let our auto industry simply vanish. This industry is like no other -- it's an emblem of the American spirit; a once and future symbol of America's success. It's what helped build the middle class and sustained it throughout the 20th century."  (Nooooooooooooo!!!! More class warfare! Help, Rush!)


"It's a source of deep pride for the generations of American workers whose hard work and imagination led to some of the finest cars the world has ever known. It's a pillar of our economy that has held up the dreams of millions of our people. And we cannot continue to excuse poor decisions. We cannot make the survival of our auto industry dependent on an unending flow of taxpayer dollars. These companies -- and this industry -- must ultimately stand on their own, not as wards of the state."

Whew, what a day, right?  A president of the U.S. is taking extreme measures to save capitalism (again) and the right-wing moon-bats claw and scream and kick and foam and demand to be left to die penniless and without hope. (Yawn.) Just another day in Crazyville.

Mike Malloy is a former writer and producer for CNN (1984-87) and CNN-International (2000). His professional experience includes newspaper columnist and editor, writer, rock concert producer and actor. He is the only radio talk show host in America to have received the A.I.R (Achievement in Radio) Award in both (more...)
Related Topic(s): Capitalism; Cars; Government; World Issues, Add Tags
Add to My Group(s)
Go To Commenting
The views expressed herein are the sole responsibility of the author and do not necessarily reflect those of this website or its editors.