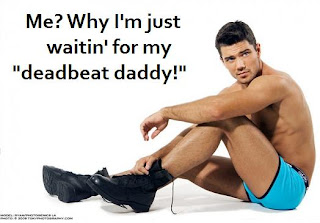 Did you know that homosexuality is the REAL cause of "deadbeat dads"?? Mike Huckabee says so!!

Yesterday, I could smell the explosion of fire and brimstone here in San Francisco (where it was a cool and beautifully clear day, totally devoid of God's wrath). I could even sense the gnashing of teeth, ripping of garments and tearing of hair. And I'm evil enough to say that I enjoyed it all. The Christian Right, in full force, came out in its totally self-righteous mode, entertaining the whole country.

So what the hell did people expect? My fingers were glued to the keyboard the moment I read the news about Obama, the Justice Department and DOMA. Then I thought, "Sit and wait, rev." The deluge of self-righteousness was overwhelming: so many people were "appalled" at the "outrageous" and "unthinkable" act "radical element" Obama has done, all-but-declaring DOMA to be null and void, "abandoning his role as President." Some diatribes were (relatively) short, others long-winded and others too flabbergasting to be coherent. The panoply and intensity of outrage was - to use their own words - "staggering":

I first went to Family Research Council's Tony Perkins since he has become, after all, the country's Grand High Exalted Mystic Ruler of the Royal Order of Righteous Rhetoric:

"This decision by President Obama and the Department of Justice is appalling. The President's failure to defend DOMA is also a failure to fulfill his oath to 'faithfully execute the office of President of the United States.' What will be the next law that he will choose not to enforce or uphold? "Marriage as a male-female union has been easily defended in court and overwhelmingly supported by the American people.

Ahem. That "overwhelmingly supported by the American people" has changed a bit since the Dark Ages (before Prop 8), but Perkins is well known for skewing numbers to the point that some researchers are thinking of suing him and the FRC.

"This is outrageous and unthinkable ... Today President Obama has abandoned his role as President of the United States and transformed his office into the President of the Divided States. He has been the most divisive president in American history.

Staver's bluster is countered by the fact that Obama has always been a lawyer first, a President second and a constitutional scholar third when it comes to matters of law. He would not have made such a statement if he hadn't thought it out with all of the legal ramifications it might entail.  The "divisive" adjective may go along with Perkins' "overwhelming" statement, but people are beginning to think differently about same-sex marriage... and Staver knows it.

Rev. Dan Vojir is has been writing/blogging on religion and politics for the better part of ten years. A former radio talk show host (Strictly Books " Talk America Radio Network) and book publisher, Dan has connected with some of the most (more...)
Related Topic(s): Bryan Fischer; Christian Values; Christian-only; DOMA; LGBT; Marriage Equality; Mike Huckabee; Obama Issues Policy; Pat Robertson; STUPIDITY; (more...) Same-sex Marriage; Santorum Rick; Tony Perkins, Add Tags  (less...)
Add to My Group(s)
Go To Commenting
The views expressed herein are the sole responsibility of the author and do not necessarily reflect those of this website or its editors.