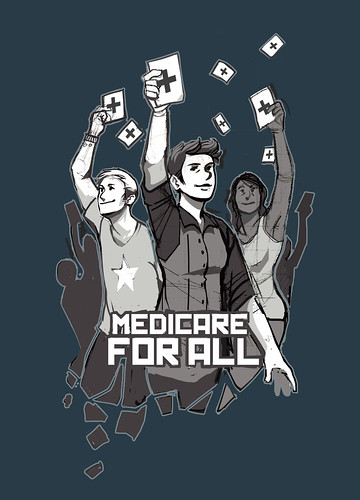 Medicare for All
(Image by juhansonin)   Details   DMCA

Senator Bernie Sanders, Elizabeth Warren, Cory Booker, and Jeff Merkley, are introducing a Medicare For All bill in the Senate. It's a model for where this nation needs to be headed.

Some background: American spending on health care per person is more than twice the average in the world's 35 advanced economies. Yet Americans are sicker, our lives are shorter, and we have more chronic illnesses than in any other advanced nation.

That's because medical care is so expensive for the typical American that many put off seeing a doctor until their health has seriously deteriorated.

Why is health care so much cheaper in other nations? Partly because their governments negotiate lower rates with health care providers. In France, the average cost of a magnetic resonance imaging exam is $363. In the United States, it's $1,121. There, an appendectomy costs $4,463. Here, it's $13,851.

The French can get lower rates because they cover everyone -- which gives them lots of bargaining power.

Other nations also don't have to pay the costs of private insurers shelling out billions of dollars a year for advertising and marketing -- much of it intended to attract healthier and younger people and avoid the sicker and older.

Nor do other nations have to pay boatloads of money to the shareholders and executives of big for-profit insurance companies.

Finally, they don't have to bear the high administrative costs of private insurers -- requiring endless paperwork to keep track of every procedure by every provider.

To make matters worse for Americans, the nation's private health insurers are merging like mad to suck in even more money from consumers and taxpayers by reducing competition.

At the same time, their focus on attracting healthy people and avoiding sick people is creating a vicious circle. Insurers that take in sicker and costlier patients lose money, which forces them to raise premiums, co-payments and deductibles. This, in turn, makes it harder for people most in need of health insurance to afford it.

This phenomenon has even plagued health exchanges under the Affordable Care Act.

Medicare for all would avoid all these problems and get lower prices and better care.

Ideally, it would be financed the same way Medicare and Social Security are financed, through the payroll tax. Wealthy Americans should pay a higher payroll tax rate and contribute more than lower-income people. But everyone would come out ahead because total health care costs would be far lower, and outcomes far better.

Related Topic(s): Health; Insurance; Medicare For All, Add Tags
Add to My Group(s)
Go To Commenting
The views expressed herein are the sole responsibility of the author and do not necessarily reflect those of this website or its editors.